The Professor cooks up a UPSET

So why is Middletown South moving on in the SCT?  They can handle adversity…They play for each other…they have a coach who gives them a major edge every night and most most importantly they trust each other. 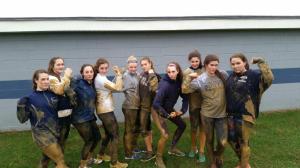 They got down and dirty again

When the season started, Tom Brennan felt for the first time he did not need to be perfect. He did not have the talent of the big 4, but he had closed the gap. He was ready and excited to make a real run at a SCT title. Then his D1 post player Jill Favery tore her ACL and was out for the season. Disappointed but still full of hope, his team marched on. Then his star sophomore Haley Dalonzo got hurt. Finally his star player Stephanie Karcz,… lost her Aunt, this after watching her mother battle breast cancer for a year. Tom Brennan’s team had hit bottom. So just like in the movie Middletown South had to make a decision BECAUSE…

” they were in hell
and they could stay there
and get the crap kicked out of them
Or they could  fight their way
back into the light.
They could climb there way out of hell.
One inch, at a time. It’s when things are taken from you, that you learn how hard things can be.”….Middletown fought its way back to the light and shoved RFH INTO  SCT DARKNESS

Middletown has a star in Stephaine Karcz, but she doesn’t behave like a spoiled brat. She doesn’t want to be bigger than her team. Alexandra Balsamo, Madison Curtis, Haley Dalonzo,  Angela Debartolome,  Brianne Naughton and Julia Valkos all know they matter. They all know nobody is more important than anyone else on the team. One player may get more hype, but they all do the same work. They all know everyone is treated the same and expected to play Middletown basketball.Team work…sharing the ball…rooting for each other…not concerned with credit. This works just fine for the Middletown team because they know their talent level is not that of others. So they are happy to  play for each other, they swim together or drown together. Today they are swimming! They are not jealous that one player gets the majority of the spotlight. Because they know days like today make reading your name in the media NOT VERY IMPORTANT.  They know 5 fingers make a fist and when a fist hits, it hurts. Middletown South is team folks and today a lot of people found that out teams win games.

Two weeks ago I watched Tom Brennan put on a coaching clinic and steal a game. After the game a parent said he steals a lot of games from the sidelines.  I laughed and said Tom Brennan out coaches everyone, not just your coach. Last night I received a text from Coach Brennan at 9.33pm it simply said “GUESS AGAIN”  Tom Brennan believes in his kids and they believe him…. He was right, I should of known better than to go against the professor.

Never bet against this man

Trust is everything when it comes to sports. The players must trust the coach and the coach must trust the players. The kids who play for Tom Brennan trust him and vice versa.  They know his affection and words ring true and when he told  them…”we will be fine”, they believed him. Now Middletown South will take on its  biggest challenge ever in the semi-finals..but for now the Middletown girls all know, ..

” They can look at the girl next to them and look into their eyes. They know that girl is  going to see a girl who will go the extra mile for them. They know she will sacrifice herself for the team. Because when it comes down to it she knows that girl will do the same for her”

St . Rose moves on and that’s not a surprise . Neptune lost the  game but gained a great deal of respect. SJV and Mansquan for a third time. It’s only right…

While today’s lost will sting like no other…Grant Stant, Sam Sabino, Janae Mayfield and Hannan Miller will all head to the states. The seniors won a group 2 title as sophomores and winning another one would be sweet. All  4 have been pillars of the RFH programs. While they never won a SCT they were in the hunt every year…great job ladies and good luck!