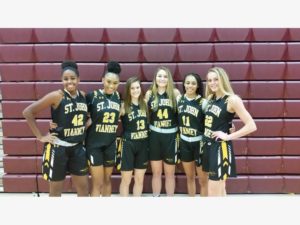 SJV HAS ROSTER OF ALL D1 locks

Last night the SJV JV team beat RFH’s JV and that was the most exciting thing that happened at St. John Vianney on  PINK NIGHT a way to rise money and cancer awhereness. The anticipated match up between the varisty’s had none of the same  suspense or excitement

Pressure does a lot of things to a basketball team. It’s speeds them up, forces players to handle the ball who normally don’t, it creates turnovers, makes teams forget about shot selection. But more than anything else it  fatigues teams and makes them beg for air. Yesterday SJV introduced all these things to the  inexperienced RFH BULLDOGS. There was great hope last night for a competitive game. This was the first big game in the conference. A chance for RFH to show they can play with elite teams. But any thought of this ended with the tip.  SJV’s size, length and strength was fully on display as they wasted no time sending a message to RFH. They played at a pace RFH could never adjust to the entire evening and played volleyball on the backboards.

It is well known that SJV traps all ball screens, nobody in the shore even brothers anymore  to run ball screens. SJV’s half court defense resembles a college teams philosophy. They always try to take something away from an opponent. So when RFH who has relied on ball screens and stagger screens to free up its star Tori Hyduke did  so last night. They quickly found that size really does matter. SJV trapped Hyduke early and dared her teammates to become scorers or play makers. Roles they have not played all year. When Hyduke did try to beat the traps, she was forced into off balance floaters or ran into the Forrest named Megan Fruch and Brie Bellamy. Meanwhile Fruch was a beast on the glass and her teammates buried jumpers or forced turnovers. SJV led  after one 23-12 and Coach Karpell had already went 8 deep into her bench. 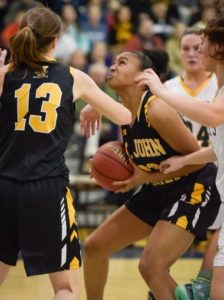 The 2nd  quarter saw much of the same with Jada Bonner, Sara Karpell and MADDIE DORING wreaking havoc both on offense and defense. But in was Bellamy’s turn to dominate the glass. RUMSON on the other hand battled. Despite turnovers and missing shots that were makeable. They found themselves only down by 16 points. This after at times it looked like SJV was getting ready to apply the knockout. There star player only had 12 points and the  gritty Bulldogs must have felt they had survived the worst…they were wrong.

There is a funny thing about fatigue, you never see it coming. That is unless your SJV who makes a living out of making opponents beg for air with their pressing and running style. The start of the third quarter put  a end to any hopes for RFH. SJV turned up its pressure and basically ran a tired RFH team out the gym. MADDIE DORING and Jada Bonner were unstoppable. Rahema Henderson came flying off the bench pushing the ball. It led to easy baskets and more importantly forced RFH to grasp for air. By then RFH , simply had  stopped running anything that  resembled an offense. Gone were the ball screens and movement of earlier. Coach Callahan had decided his best hope was his superstar Tori Hyduke.  Both had ran out of patience,  so Hyduke to my count took every shot in third quarter except three. It’s was  strategy that at times had worked for RFH this season. On this night RFH would pay dearly for such  indiscretions . Because when Sara Karpell did her Cookie Monster  impersonation and stole the ball from Hyduke at half court out of a RFH timeout for a easy bucket . This game was a wrap for all practical purpose. The third quarter ended with SJV up 60-30. 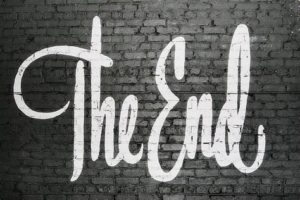 The 4th quarter was simply a time for padding stats. A tired RFH simply stop playing defense as Jada Bonner simply got uncontested layup after uncontested layup. I stopped counting after three. While the game was clearly a blow out both teams started there starters. So the SJV players got a chance boast there season stats before the hook they knew was coming. Meanwhile RFH who had long been reduced to Hyduke coming down going one on one, continued the same  strategy. The SJV traps had long stopped and the goal of shutting her down was now senseless with such a  lopsided  score. As her teammates watched, Hyduke made some three’s and missed some three’s and she drove to the basket and made a few and missed a few, in a final effort to make the score look respectable. Coach Karpell finally emptied her bench in a act of mercy. Then finally  with 1 min and 9 seconds left Tori Hyduke mercifully left the floor. The stat padding for the day was officially over and both teams left intact to fight another day as SJV scored a whopping 80 points to RFH’ 50…..THE END