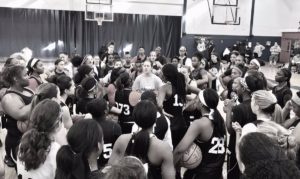 I often complain about kids playing games in the fall. It drives me nuts when it all about getting stats in meaningless games. I believe it should be all about the high school team and training this time of year. So when I heard about the KEIL MOORE SHOWCASE last weekend the first thing I thought was, here we go again. Another event that is going to be all about hype. I thought he we go again, another event where kids are being so called evaluated by scouts and yet not one D1 or D2 coach will be in the gym. I thought it would be another day of kids playing glorified AAU games….. BOY I WAS WRONG. THE KEIL MOORE SHOWCASE IS JUST WHAT WE MAY NEED TO SAVE THE FALL RECRUITING PERIOD!

Former University of Tennessee PG @DrayaNichole sharing some wisdom with campers and @AshleyCorralPT gets the day started. pic.twitter.com/tzfqtn85Fe

FORMER U OF TENN. GUARD DRAYA NICOLE..KEEPING IT REAL

If the NCAA wanted to do something good for girls basketball they can start right now with the Keil Moore Showcase. When I went to my Twitter feed last weekend, I saw something I could not believe, this time of year. I saw talented players, girls with D1 offers on the table doing much more than playing games. I saw girls regardless of ability being held to the same standard as every other player.  I saw coaches talking to girls about working hard and being competitive. I saw coaches talking to girls about fundamentals not points and stats. I saw coaches talking about being a teammates and GETTING BETTER. I was shocked to to see such things on display in the FALL. I saw coaches say things like “get rest and come back this afternoon and give your best” I saw this type of motivation of kids. It was clear playing games was not the backbone of what this event was about. I also thought this is the model for the NCAA  in the fall. This is what college coaches what to see, ALONG WITH GAMES.

Jane McCauley (@jane_mccauley) has had the burner all camp and showed her range well. A shooter with great shot selection. pic.twitter.com/rjSnSgBI2z

Jane McCauley (@jane_mccauley) has had the burner all camp and showed her range well. A shooter with great shot selection. pic.twitter.com/rjSnSgBI2z

There is much to be said about the Keil Moore Showcase that has nothing to do with basketball. Like hundred of girls coming together with other girls from other states. I saw smiles and laughter from teenage girls. I saw a few big time players in the background behaving just like any other girl. These are real life lessons for girls and more importantly a real chance for a young lady to grow as a player and to measure themselves against some of the best players; and build self esteem. Why college coaches across the country would not be allowed to attend such an event is beyond me. Folks Keil Moore Showcase is the model, we must go to in the fall..teaching, coaching, exposure and most importantly GIRLS HAVING FUN. This is not a AAU tournament where AAU coaches are out of control or kids are giving each other the evil eye. This was an event where everyone was rooting for everyone to have a great day…..NCAA are your listening and more importantly are you watching. This event was about educating not eliminating .

LOOK AT THE FACES ON THESE YOUNG LADIES…SAYS IT ALL!

I spoke to a few shore kids who attended this event and everyone loved it. They didn’t talk about just basketball. They talked about the drills and the one on one challenges in  front of the entire camp. You could hear the excitement in there voices. Yes they did play games and yes their was a chance to get some exposure for kids, but this event seemed way bigger than all of this. I saw female coaches, roles models for young girls, coaches who have done it at the highest level. I saw male coaches who where not yelling but rather encouraging them… this my friends is what grass roots basketball should look like… The Keil Moore Showcase just showed the NCAA there are people doing what’s right for kids…they showed we don’t have to shorten the recruiting days. WE JUST HAVE TO DO IT BETTER AND KEIL MOORE JUST SHOWED ME…. WE CAN DO IT BETTER AND LETS HAVE MORE FALL EVENTS LIKE THIS .