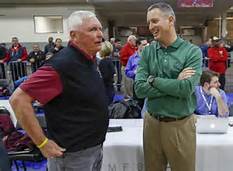 Today there was an article in the Star Ledger about Mike Rice. It was an article about how Mike Rice has done a great job at the Patrick School. Mike Rice gets praise from the players, the parents and entire PATRICK SCHOOL  community who loves Mike Rice. My response to all this is BIG DEAL….why the hell is this news in the first place.

If you know Mike Rice, then you know and like Mike Rice. Before the video’s came out, you did not know one person who did not like Mike Rice. Mike Rice was that white guy the brothers loved (that’s black folks for those who don’t know, what I’m talking about). He was the guy all the coaches in the business loved hanging out with. Mike Rice was the guy all the kids loved. He was the cat AAU guys knew they could work with. He was the guy everyone knew, would never cheat or turn on a kid….he was that guy.  Then the video came out and all that changed. He almost lost everything he loved, I HAVE SEEN THE TEARS IN HIS EYES. 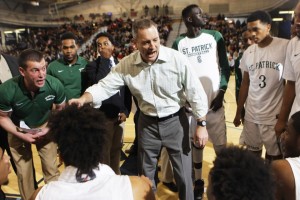 Mike Rice became a story, a way to corner the market in the newspapers and TV. Then when things slowed down, on the slow news day he was the go to story. Nobody threw Mike Rice a lifeline, nobody was interested in letting him or his family off the hook. He didn’t get a lifeline, even tho every one in the business knew Mike Rice was nothing like the guy doing dumb ass stuff, trying to motivate a undermanned and overly matched team, on video. Before that video, Rutgers was finally moving in the right direction in decades. But none of that mattered and nobody was interested in talking about Mike Rice’s past on record. Nobody wanted to discuss the Mike Rice before the video became national news. I told him to call all  his so called friends and tell them to “kiss his ass”.  But Mike Rice was too busy blaming himself and feeling he let the world down. Me, I have no interest in coaching in college again.  I told him, he was playing the political game. It’s easy for me, my interest in coaching is zero!  You see it’s about protecting your image and your butt….and all Rice’s so called friends where doing just that. Now I am going to make a prediction, it’s a fact folks. MIKE RICE WILL BE COACHING IN COLLEGE NEXT YEAR.

Why will Mike Rice be coaching in college next year? Because first of all Mike Rice is well liked and folks believe me that matters more than you can ever understand. Next Mike Rice will get a job because his basketball mind is off the charts. Now understand this, unlike most who say such things. You never hear me talk this way unless I mean it. If there is one thing people learned about me during my coaching days was this. I was not the political guy who said nice things, to win favor. I found out early, if your good, you could rob a bank and they’d find an excuse for you unless it hit the papers. I know a lot of guys right now with big jobs who I wouldn’t let walk in the gym and tell one of kids the time of day. Mike Rice is a basketball junkie who lives and sleeps the game. That’s why he is going to get a job this year. Mike Rice is somebody who is a rentless teacher and recruiter. He is the guy who comes into the gym excited the Patrick School has a new building or school. No disrespect to Mike or The Patrick school, why a guy cares so much  about a school, he has been at for only a year, makes not sense to me. Maybe it’s the reason, everyone in the business with a brain knows this Mike Rice loves kids….so Mike Rice will get a job. But make no mistake I hope Mike Rice and his family and the school that hires him, remembers one name… Chris Chavannes. 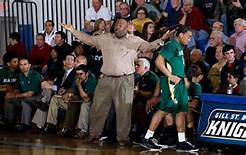 CHRIS CHAVANNES IS THE REAL STORY

When things go bad, let me tell you what most do in the coaching business…DUCK. College coaching is big business, so when a mistake is made the price to pay is high. Nobody cares about who you were before the mistake. Now many will try and help and say a few good words. But when it comes to nitty gritty time. Trust me most in the coaching business are covering there ass…they don’t want the national media knocking on there door. Now, so what if you have been a proven winner, respected by all and considered a good guy. That stuff goes out the window and nobody gives a rats ass. Because hiring a guy who has broken rules, cheated or does not give a hoot about education is way better than hiring a guy; on ESPN everyday looking like a mad man. But Chris Chavannes is not that guy who forgets and worry’s about politics. Chris Chavannes is somebody who understands we all have our skeletons. He understands that sometimes we all make mistakes, but he also understands the body of work matters, when  judging people.

Chris Chavannes folks is the real deal because when his health issues put him on the sidelines, he called Mike Rice. Now let me explain something to you, Chris Chavannes took a real chance. He had to know that the first time a parent came running into his office, it put as I like to say his GIG IN DANGER. He had to know that some young sports writer who wanted to make news or a name for themselves, had the perfect target. There was no reason  for Chris Chavannes to take a chance on Mike Rice, except for one reason….his kids. 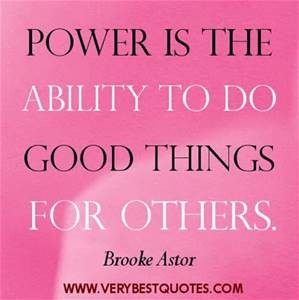 Chris Chavannes took a chance and did what was best for his kids, his children and school. He put his gig on the line for Mike Rice, because one mistake and it could have all gone wrong. He wouldn’t be able to say “oh well my bad”  He hired this white guy coaching a bunch of brothers who was suppose to be a racist ((we have all found out that was a bunch of Bullshit). Why in the world would Chris Chavannes do such a thing? I will tell you why, there are still some people who really care about kids and not image. There are still some people making real moves for kids. There are still some people who have vision and thinking outside the box. Chris Chavannes knew Mike Rice would be great for his school, program and kids. He knew the the character of Mike Rice and understood that Mike Rice’s passion for kids is special and for selfish and the right reasons he hired Mike Rice. 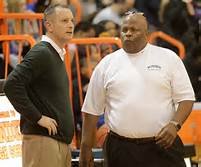 THEY BOTH HELPED EACH OTHER

Mike Rice is getting a college job folks. Just bet on it, because college coaches like winning. If you have Mike Rice as your coach or on your staff, just trust me …your winning. Now the unstoppable’s a group of girls he coaches may not be happy to hear this, but Mike Rice is getting a new start. He is getting a new start because the media has decided, he and more importantly his family, have been kicked around enough. AD’s and college coaches are not dumb. They know the vaule of Mike Rice and some coach or AD with the vision of Chris Chavannes will hire Mike Rice. Soon their will be a press conference announcing Mike Rice as a new coach. Mike Rice will go do what he has always done, make some program much better. He will do what he is has done all his life. Mentor some kid who nobody believes in. He will make alumni laugh and can’t wait to open their pockets. Mike Rice will do the things that made him one of the best young coaches in America, before the video….but nobody will remember the guy that made it all possible for Mike Rice….Chris Chavannes, because all he cared about was his kids…..and why the hell would that be a story anyone is interested in….