JEN INMAN…IT’S TIME SHE GETS A FAIR SHOT! 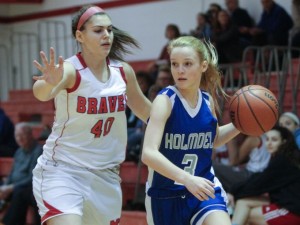 I could give you all the reasons why recruiting is so hard on both colleges and players. I have been on all sides of the process. I have been a recruiter at the D1,D2,D3 level. I have had two children go though the recruiting process. Unlike most I see the entire picture, I know the work ethic, the character and the parents of players. I get to see these things play out over years, before a player or school is ready to make the big decision’; regardless of it’s right or wrong.  So it no surprise to me when a talented player is missed or a overrated player is recruited…- This is why Jen Inman is no surprise to me these days.

I could give a 100 reasons why Jen Inman right now is still on the recruiting board and none of it would make sense.  I wrote about Jen Inman a year ago and told people this… she is a special talent. Then like everyone else I turned my back and forgot about her. How many recruiters out there know Jen Inman? How many have done the homework it takes to steal a player of her ability. The same mistake many made with her sister who is at Seton Hall right now, many are making again. It’s not because coaches are lazy or blind. It’s because they simply don’t know and have not seen the big picture. 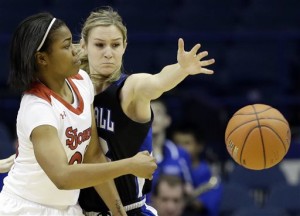 Jen Inman is not just a point guard, she is a special one caught up in the hype of so many talented point guards in the shore. There are a ton of talented baby point guards in the shore right now, some even with D1 offers. Now ask yourself this question, name one baby point guard you would choose over INMAN if you had to play a game today? Exactly, so how can a player with this type basketball IQ, ball handling skills and shooting and I mean high percentage shooting, be so under the radar? It’s because sometimes the coaches don’t know, just like they didn’t understand about her older sister. It called recruiting mistakes, it’s called recruiting the wrong player, its called I didn’t realize….this is why you have not heard Jen Inman name in recruiting ciricles. It same reason you didn’t hear her sisters name, even when she was clearly having the best season of any guard and maybe any player in the shore, during her senior year….SOMETIMES THEY JUST DON’T WANT TO BELIEVE! 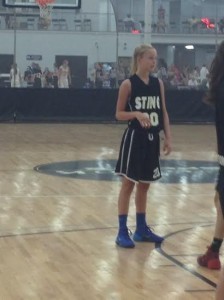 Jen Inman like her sister at some point will need to catch a break. Maybe some coach will sit down and pay attention to the NBS video sessions. Maybe they will see a blond headed point guard who is left handed and long, putting in work against the 15 D1 guards at NBS. Who knows maybe a coach will ask to see a game tape from a year ago against SJV, Rumson or Manasquan, teams that were ranked TOP 5 in the state all year or NATIONALLY RANKED. Teams where all their Point guards have given verbal commitments or have D1 offers. Teams she averaged double figures against from the point position.  Maybe they will ask for a tape of her game against Notre Dame who beat Manasquan this week and will be top 10 in the state…she had 19 points against Notre Dame last year. But more than anything else maybe somebody will just watch and pay attention and understand …for now that will be enough for Jen Inman 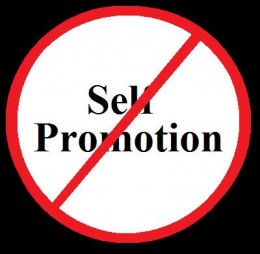 So much in the recruiting process is about name reconigtion and self promotion. Some people are bad at this. They feel performance should speak for itself, they just don’t feel good about bragging and being the center of attention. Often in these cases somebody steps up for a kid. Who has stepped up and banged the drum for Jen Inman?  I’m sorry, but do you hear circketts? Nobody has advocated for this kid and the reason is like everything else…nobody really knows why.  So today I will try and be an advocate. I will make my case to any coach and person reading this blog.

First Jen Inman is one of the nicest kids you will ever meet. She is soft spoken sentiive and respectful to all…it’s these type kids who your alumni and student body love and support. Two I see Jen Inman against the best and she is as good as any senior point guard…PERIOD… Now you want to question me on this go right ahead, I didn’t say better, I said as good and unlike a lot of people, WHO JUST FLAP THEIR LIPS.  I actually see her in the gym against these players. By the way I also see a lot of so called studs avoiding NBS because of two reasons. One you reputation is on front street and everything is based on performance and NOBODY GETS A PASS! Jen Inman is fine with both of these things…you know why? She knows she has the game to compete. Finally the final reason I want to advocate for Jen Inman is this…The young lady has been though the tough times and still has come out on top. She is somebody that has been TESTED AND IM TALKING ABOUT THE BIG TEST …MEANING THE LIFE TEST OF BEING KICKED AROUND….AND PASSED!

I know how it all works, I have seen it all and Jen Inman is just another kid who will need a few breaks.  I can’t tell you how all this is going to play out. But I hope there is a young aggressive asst coach out there, who see’s what this young lady brings to the table. I hope they are willing to go the extra mile, I hope they will pay attention to the details. Because it always comes down to the details… because Jen Inman is worth the time and it time she gets A FAIR SHOT!

ALL CURRENT PLAYERS WHO WISH TO SIGN UP FOR PRE-SEASON PREP MAY DO SO AT THE DOOR THIS WEEKEND!

ALL GIRLS ARE INVITED TO ATTEND THE BOYS SESSION AT NO ADDITINAL CHARGE!