Most people know that the College of New Jersey is one of the toughest schools in the state of NEW JERSEY to get ADMITTED TOO. According to U.S. News & World Report’  its the #1 public institution in the Northeastern United States They know the school appears every year as one of the best buys for kids entering college. TCNJ is a real proving ground for some many kids with dreams. It also happens to be the place where a former Shore Conference player is making all her dreams come true in a big way. 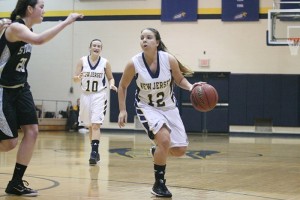 She is still surprising everyone

When Angelica Esposito decided to attend SJV 6 years ago, she had to know how hard it would be to get playing time at the powerhouse. SJV had 8 division one players on their roster. Including 5 guards who would all go on to play division one basketball. But Espositio didn’t care, she wanted to attend SJV and that exactly what she did. 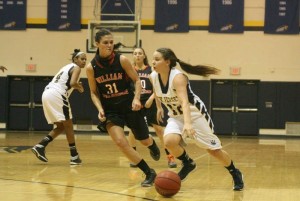 Angelica did a lot of watching her first two years. But remember she was going to play for Dawn Karpell, who knows how to use her full roster, develop kids and make them really feel part of the program. Nobody manages talent like Coach Karpell and nobody creates roles for their entire roster like Coach Karpell. Coach Karpell is never afraid to give a player, who is a hard worker a chance in a real games on a big stage….and thats exactly what she did for Angelica Esposito. 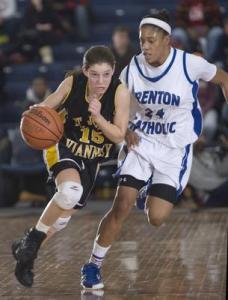 The Best PG I have ever seen Jackie Kates needed a little help vs Trenton Catholic…and Espositio gave it to her!

When SJV opened the season against nationally ranked Cicero High School in 2010, led by U-Conn star  and current College Player of the Year Breanna Stewart. Nobody gave them much of a chance. But it was a little know player by the name of Angelica Esposito, who worked herself to  the bone in the Pre-Season, who helped steal the show. ESPOSITO  had 5 points 4 assists  and the biggest basket of the afternoon in the upset win. It would be the  start to many more surprises by the junior guard that year.  Because then she stole the show against RFH, when she had 9 points in the flip game.

In the RFH game, she made the big jump shot to cut the RFH lead to 5 and then she made the sweet pass to Missy Repoli (Colgate) for the 3 to cut the lead to 2….the rest of the story is history because this allowed Jackie Kates and Arron Zimmerman to become folk hero’s forever, in the FILP GAME. (THE FLIP- http://hoopgroup.com/headquarters-blog/girls-basketball/the-flip-helps-leads-sjv-to-victory/ )  She then went on to steal the show at Tornado Alley, one the toughest places to play a high school game on planet earth.  Well in case you didn’t know Angelica Esposito is still is surprising people to this very  day. 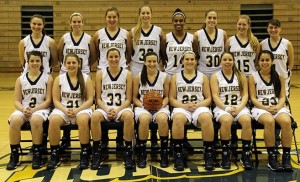 Esposito is not the only Shore Player at TCNJ

Last week Esposito led TCNJ to a victory over Rutgers Newark she scored a career high 23 points in that game. Now some reading this may go “WOW” but I can tell you none of her teammates are surprised. In her last 7 games she has scored 23, 15, 13 vs #5 ranked Montclair University, 17, 13 15, 12….I think you get the picture. Last year she she was 2nd in the NJAC in three point shooting. This year is averaging 12 points a game, almost 3 dimes in 30 minutes a night.  Espositio is still up to her old tricks …surprising us at every turn… just now at a higher level. She is becoming a real star; that impact player coaches love and opponents must prepare for. 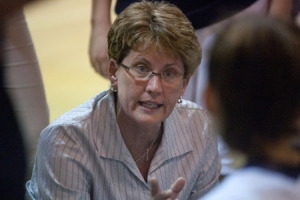 TCNJ Head Coach Dawn Henderson loves shore kids and always has made the Shore a priority. Call her and tell her you are having an event and she or a staff member is there, you don’t have to ask twice. TCNJ is loaded with Shore players, they have Kim Dana of Freehold who is having a wonderful career as expected. Chiara Palombi of Manasquan and Cindy Napolitano of St. Rose. She believes in shore kids and Angelica Esposito is making that belief even stronger as she has been a wonderful surprise. Nobody could have predicted Espositio would put up these numbers and have so much success….but as I said she loves to surprise folks and thats what she continues to do. 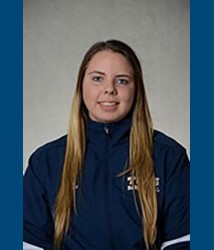 In 2009 TCNJ finished 3rd in the country losing in the final four. What was remarkable about this, is that of all the NJAC schools none have the academic rigors of TCNJ. Poor students who are talented players don’t attend TCNJ.  There are no winks and backroom hand shakes. Coach Henderson knows she has to get true student athletes and that exactly what she done over the years and why she is the winning-est coach in schools history in one of the toughest conferences in the country. 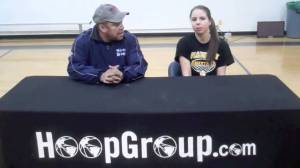 My interview with the girl full of surprises https://www.youtube.com/watch?v=vnH0ePP8NVk

When I met Angelica she barley said a word. Trying to get her to talk was like pulling teeth. She was the type of kid who tried to melt into the background. But for some reason she couldn’t do it, her talent keep bringing her to the light. It’s that talent that has allowed her to pursue a great education at a great school and continue to surprise us on the basketball court. She is a great example for all kids who want to combine education and a great basketball experience…sometimes the easy way is not always the best way…..RIGHT ANGELICA? I THINK ME AND YOU BOTH KNOW THAT:) 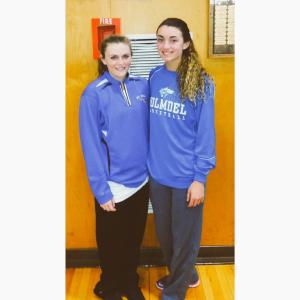 HOLMDEL was bound to catch a the big fish and Friday they did just that…Holmdel 46- Middletown South 35. Mia Ehling dropped 18 and the Freshman Christina “magic woman” Antonakakis had 11 points and 3 steals. The Holmdel fans who were upset they were dropped from the Top 10 will no question be all smiles next week…Congrats to Coach Hampton and his team on a big WIN! 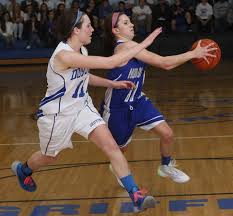 Marlboro continues to keep there dream season rolling with a win over the Star Ledgers #10 ranked Shore team Freehold. Tatum Evans had 14 points and 6 rebounds. Sophomore guard Molly Weiss continues to impress with 2 BIG buckets behind the arc late. Nicole Shatsky had 6 points and 5 dimes in the big win. Clearly my prediction that Marlboro had seen there last days in the Top Ten may have been premature. While many were pointing to there 26 point lost to Middletown South as there swan song.  The Marlboro kids continued to believe.

Folks there is a team Ranked #7 in the T0p Ten who lost to Middletown South by 19 and trailed by as many as 30 points. Marlboro trailed by one after one and 9 at the half. The Middletown bench also out scored the Marlboro bench 10-0 in the final minute of the game.

SOUTHERN topped on one of the best teams in Middlesex County, East Brunswick High School on the road. No question a lost would have most likely dropped Southern out of the Top 10. Instead Future D1 lock Gabbie Davis had a monster performance with 18 rebounds and 10 points and numerous block shots…Tirney Goetz led all scorers with 16 points while freshman Colleen Brady add 6 and Bianca Nicolini had 7 points.

The return to the lineup by Freehold Twp gaurd Hailee Porricelli should give them a big shot in the arm. Porricelli was one of the top freshman in the Shore last year before tearing her ACL

PHOTO OF THE WEEK! 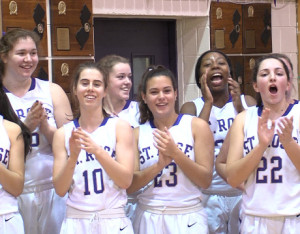 “come along a sing with us” …CAUSE WERE HAPPY”….by the way #23 one of the nicest kids you will ever meet!