ITS 1979 ALL OVER AGAIN..MIDDLETOWN SOUTH ARE CHAMPS

So where would you like me to start? I could start by telling you that MIDDLETOWN resident Stephanie Karcz was at hoop group one day two years ago. She was in the mist of trying to decide where to attend high school. She was one of the best 8th graders in the shore at the time AND if the truth be told many great Middletown players has not played for Middletown high school. Most of the star D1 players as Pankey, McGuinness and Dluhi came to Middletown South with not much of a reputation. Tom Brennan is used to taking kids and developing them and that’s the way it’s been the past 18 years. That is until Stephanie Karcz decided her local high school team was good enough for her and maybe that’s the biggest reason Middletown South is the Group 3 champs this morning. 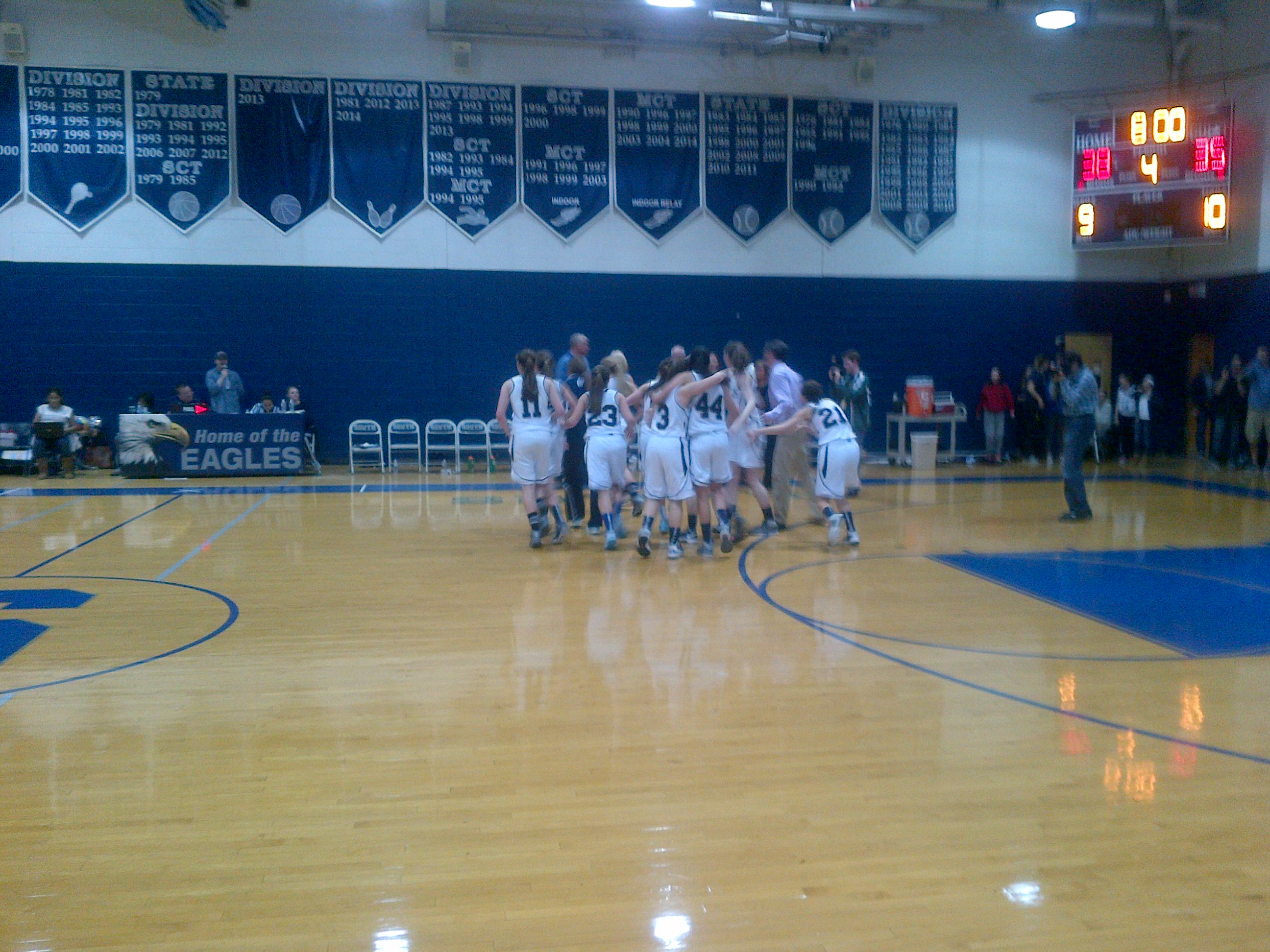 When your star player is humble and the parents are not over bearing or overshadow other kids, special things can happen. When your future Division one post player Jill Falvey says, “The win isn’t just for us. We wanted this for him,” When she says “He works so hard as a coach and puts in so much time. He gets up at 4 in the morning to watch film. Honestly, it’s insane. By us winning this game, we proved to him that we appreciated him as a coach.” – You know you got something special brewing. 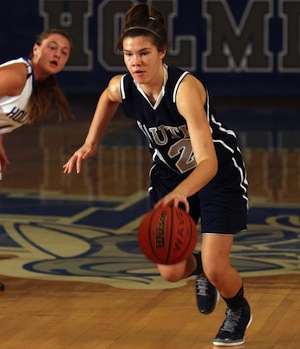 When your senior guard Christine Rutkowski says “Every time someone asks me if I have a role model in my life, the answer is always Coach Brennan,” you know the coach has earned the respect and trust of his team.
You see Tom Brennan has never wanted to do anything more than coach his kids and make sure they had a pleasant time playing a sport…because after all its just a sport. But last night Tom Brennan got a bonus for all his efforts over the years…a CHAMPIONSHIP! 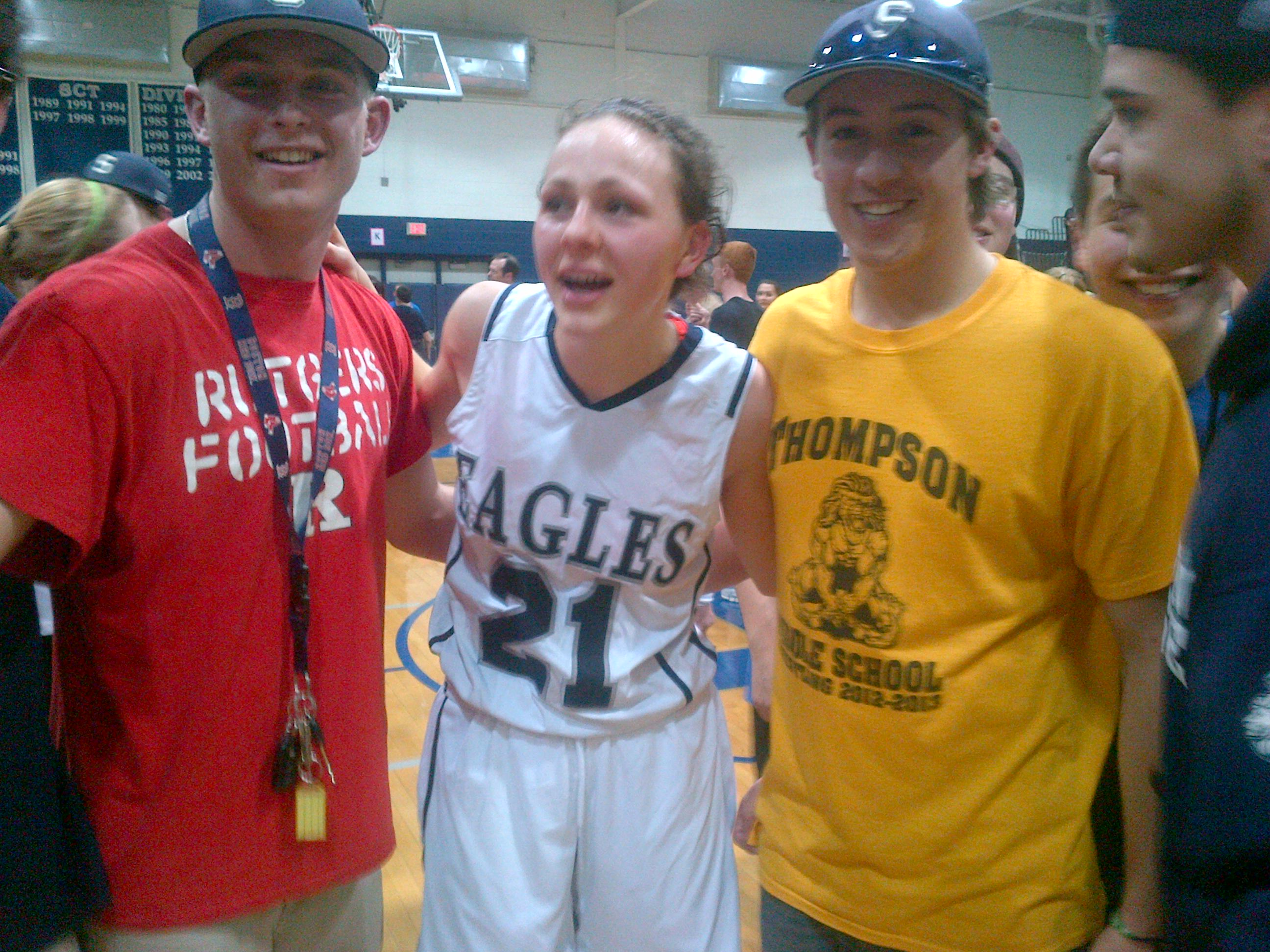 CHRISTINE RUTKOWSKI WAS SPECIAL ON A SPECIAL NIGHT

Last night the team that has gotten little respect, all season got some last night. The team that started the year in the Top 20 and had a slip up to Holmdel in the first game of the year, fell out of the Top 20 and nothing they could do was enough to get them back in. Yes they blew out Holmdel in a re-match but it was not enough and they had Rumson on the ropes only to let them get away. But yesterday they had another Top 20 team on the ropes and this time they finished them off.

I was at Middletown’s South first game of the year in that lost to Holmdel. I spoke to Coach Brennan he changed his style and he asked me my thoughts. He knew he lost 4 starters, so he wanted to play different and use his bench more and he paid for it on that day. But like all good coaches Tom Brennan saw this big picture.

Tom Brennan took a page out of the Manasquan play book last night and packed in his 1-2-2 zone. He dared Neptune to shoot from the outside and then his team rebounded as a gang. He also had a few tricks up his sleeve, like when late in the game, when Neptune called a timeout to set up against the tightly packed zone. The professor switched up and extended his zone for the first time all night and caught Neptune off guard and forced a big Turnover…Professor Brennan put together a great game plan folks. But remember your kids must execute any game plan and that’s what his local kids did. 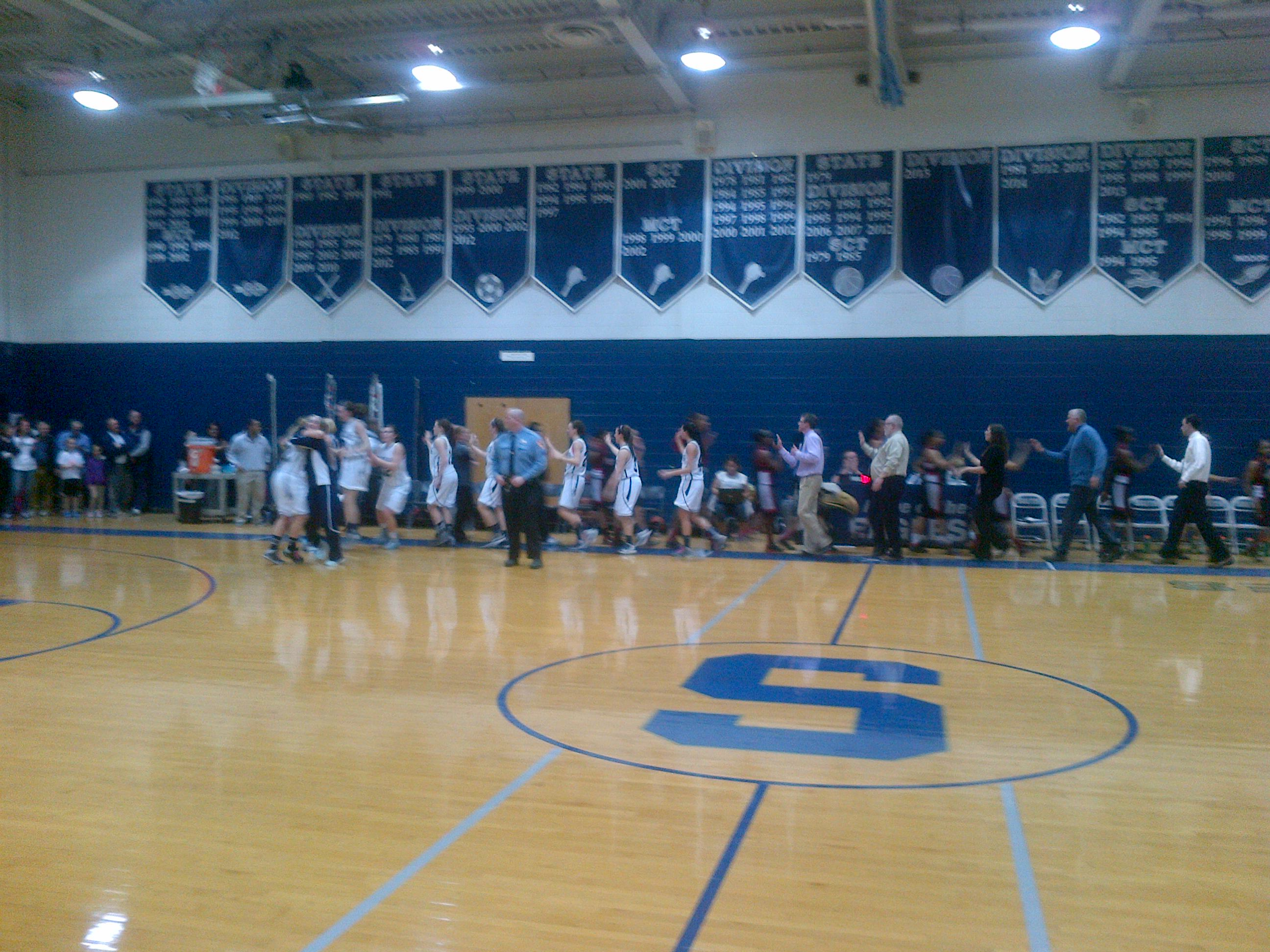 THE WALK OF WINNERS

His center Jill Faverly battled the two 6’2” athletic and Division one bound forwards for Neptune. Hubbard was super and Crenshaw was also good all night. But Jill Faverly played every minute of the game and never allowed either to dominate. She rebounded and the ones she couldn’t get, she slapped out to teammates, Faverly was FAV-bulous last night and has been forgotten most of the season but last night she reminded everyone…I’m the real deal. 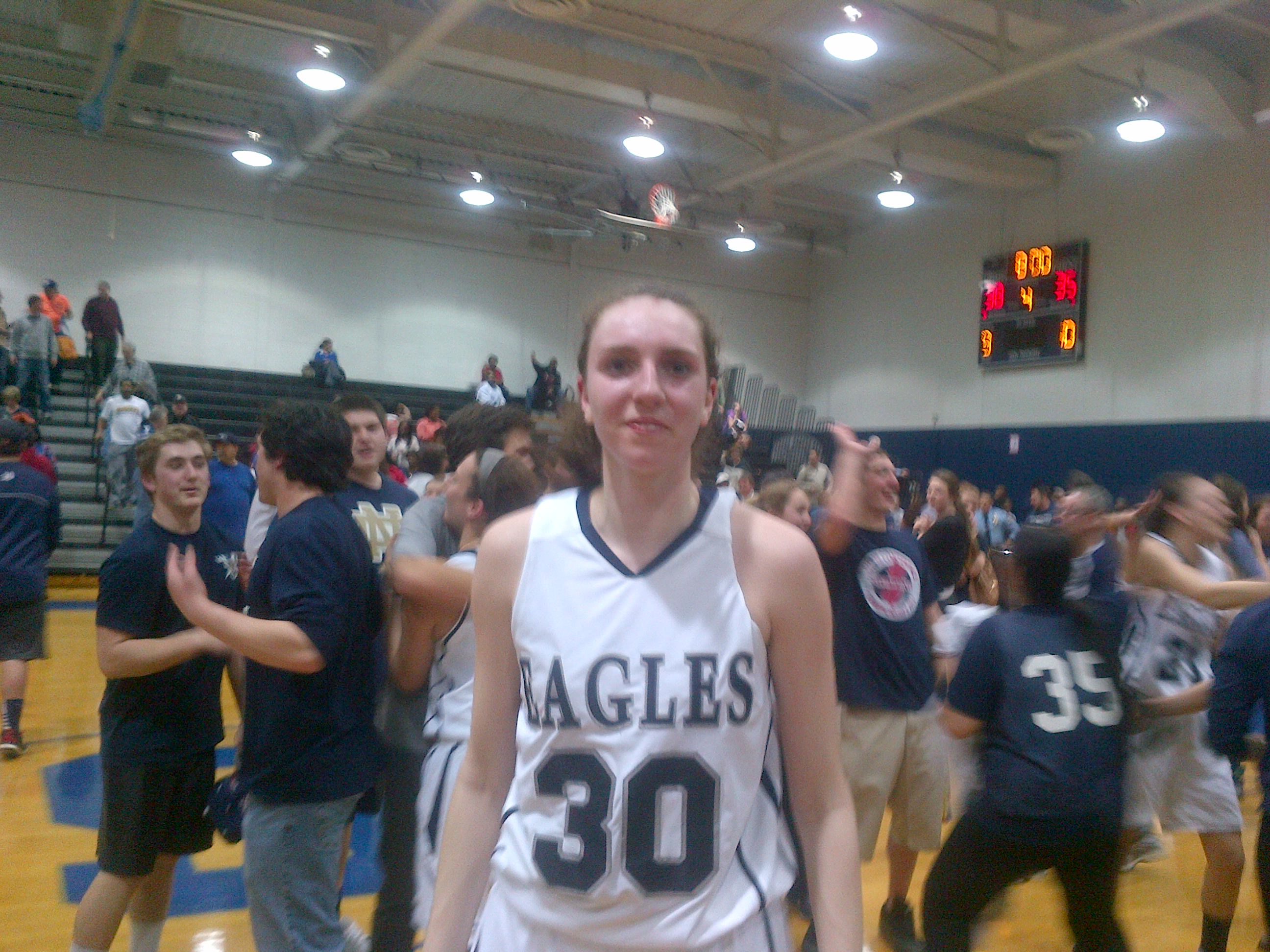 Then the senior Oliva Liskowitz who was not expected to play was on the court. She gave her team heady play all night. But it’s what she did late in the game I doubt many noticed. She dove on a loose ball that she had no right to get and that loose ball may have decided the game last night. How she had the heart and desire for such a play coming off an injury is shocking to me.

Rachel Becker name won’t be on the lips of fans, but her free throws to tie the game and her defense late cannot be forgotten by South fans, this kid did not buckle all night

Freshman Haley Dalonzo let’s just say is not afraid of anything, her mad dashes to the rim was something of a beauty. She played the entire night with passion and fire. A freshman in this sitting to deliver is unheard of at Middletown South. She is turning into a mini Stephanie Karcz, not a good thought for Shore opponents.

But the real story of yesterday was the backcourt of Stephanie Karcz and Christina Rutkowski as the two harassed and disrupted the Neptune team all night. Karcz was a jock all trades; she rebounded, scored at the rim and hit 3’s. Christine Rutkowski had 7 points in the 2nd half and this was huge for many reasons but none bigger than this…. In the 3rd quarter Karcz picked up her 4th foul. She went to the bench and Neptune player’s fans and eyes lit up, with cheers. But guess what? Christine took over the game on offense and defense in Karcz absence. It allowed Tom Brennan to leave Karcz on the bench. Stephanie Karcz got a rest and Middletown had a fresh well rested Karcz for the entire 4th quarter ….to steal the ball and seal the win for Middletown. 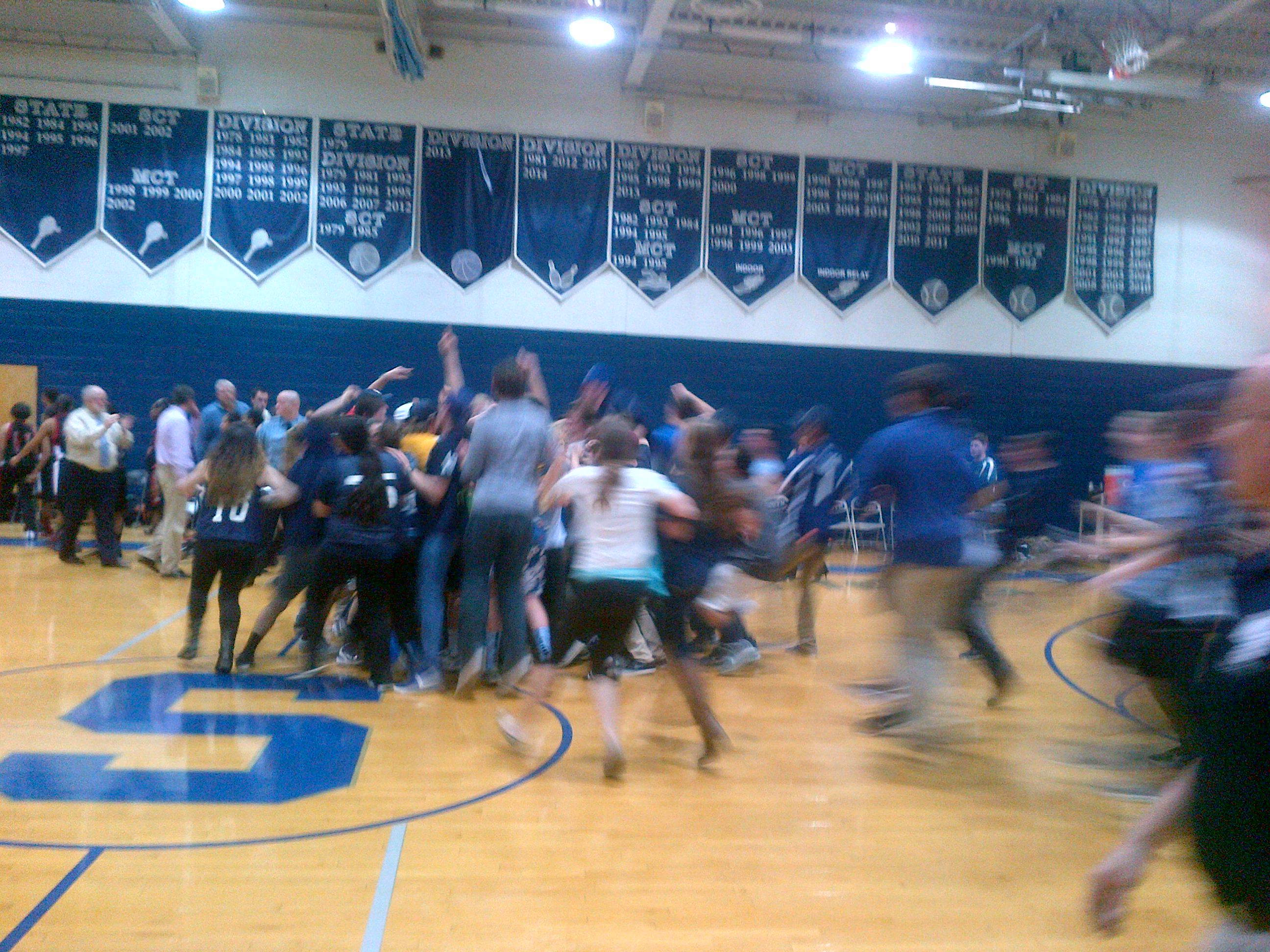 Yesterday was about doing things the right way, it was about kids being happy and enjoying their high school athletic experience, is that not the real job of a high school coach? And Yesterday his MIDDLETWON SOUTH GIRLS team SENT THEIR LOVE TO HIM, THE BEST WAY THEY KNEW HOW…WITH A CENTRAL JERSEY GROUP 3 TITLE.