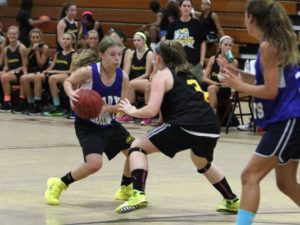 Two years ago Christina Antonakakis was named to the Shore All Freshman team. Many believe she would one day be the best pure point guard in the Shore. Her leadership ability along with her exciting style of play; made her must see basketball.  College coaches were buzzing about the 5’4″ Holmdel star. It appeared Christina Antonakakis was living a dream. A star basketball player and a mega student off the court. Life was good, but sometimes things change. Sometimes things happen and you and nobody around you, can understand how it all could go so wrong.

Christina Antonakakis is a gym rat of gym rats. Many times when I don’t see a kid in the gym, I will ask “where have you been”. Often they say I have been working out on my own. I laugh and say okay… but I don’t believe them most of the time. When Christina Antonakakis says “I’ve been working out on my own” you know it’s the truth. I had a coach in the American East say this about Christina Antonakakis,  “that kid is the best leader I have ever seen. She could run a college team right now”.  I’ve seen few kids with Christina’s work ethic or personality. No kid lights up a gym like Antonakakis, she makes everyone smile,she has a way of putting all those around her at ease. She is the first one to clap or say good job to another competitor or teammate. She is the first one to correct and show a young player how to do a drill or run a play correctly. She is the ULTIMATE TEAMMATE. If you ask anyone who has met her, they will tell you she is the most unselfish player and person they know. They also will tell you she is the happiest kid they know on a basketball court…that was until last year. 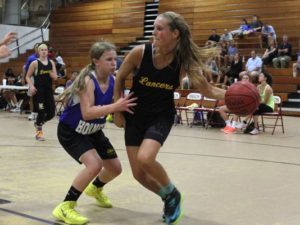 A year ago, I sat in the gym after a NBS after a session. Christina Antonakakis told me she was considering transferring to RFH. The reasons where not just basketball related. I told Christina that basketball must be a major part of her decision, because she loved the game too much. We agreed to talk again the following week. The next week, Christina, her dad and I sat and discussed what her plans were. They had decided Christina would attend RFH for various reasons. I had explained to Christina and her family that RFH was a program with lots of talent. I told her family DON’T assume anything. I encouraged them to please speak to the coaches again. I told them to ask the hard questions about what to expect. I also asked a parent at RFH to speak to the Antonakakis family. I had real concerns and expressed them to the family.

I felt if any kid could win over the coaches, players and parents at RFH…. it was Christina Antonakakis. It appeared in the fall she would do just that. Antonakakis had people raving in the fall about her unselfish play. It looked like she would be a wonderful addition to the program on and off the court. But the fall looks nothing like the regular season and nobody learned this more than Christina Antonakakis. It was during the regular season that Christina Antonkakis, would lose her innocence. She would learn the world of sports can be cuel and not always fair. 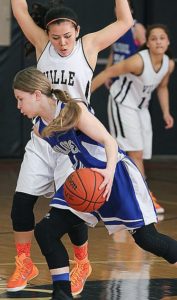 Last season Christina Antonakakis played very little for RFH. She had to be confused about what was taking place. She watched a talented team that couldn’t get over the hump.  She watched all this from the bench, a place she had never been before. All she wanted to do was help her teammates. When I went to see her play I was shocked. She had lost her spirit and more importantly her biggest gift…her smile. All people spoke about was how somebody so happy could be so sad. Not getting on the court was one thing. But seeing a young lady so unhappy was crushing.  After the school year, Christina told me, she was returning to Holmdel. It was strange year for Christina, I don’t think she or anybody could really explain what took place. The best way I heard it described was like this, “she was on a long strange trip”.  But in true classic Christina form, she said “There was a reason I was put though this, I learned a lot about people. It was a good lesson for me, it will make it stronger”   Now you know why she is special. 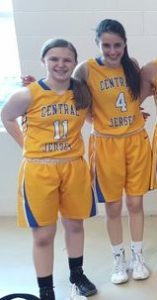 I didn’t see Christina as much this fall as I have in past years. She was locked into her academic calendar. But when she showed up at NBS everyone was happy. The gym has a different vibe, when she is  in it. Everyone seems to come to life. I watched her play and I knew she was back. The jumper pure and one of the best handles in the Shore was back on display. The vision and leadership had everyone working just a little harder …COACHES TOO! But more importantly the laughing, joking and smiling was back. Christina is back and more importantly her game is back on the floor. She played AAU for the Belles this fall and once again college coaches were reminded, she is that rare player.

“This season CHRISTINA ANTONAKAKIS is going to have a monster season. She will be one of best players in the Shore. She will make every player on Holmdel better. But more than anything else, what Christina is going to show us is this, TOUGH TIMES DON’T LAST…BUT TOUGH PEOPLE DO”….Tiny Green