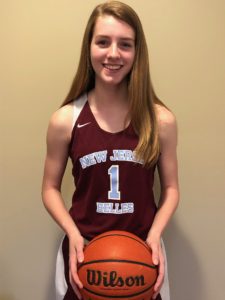 Today’s  SPOTLIGHT PLAYER  is somebody that soon will become a household name. ASHLEY O’CONNOR  is another St. John Vianney player who has had to wait there turn before the public at large finds out about her. She will join a long list of players who choose development over hype. This summer Ashley O’ Connor will become a name college coaches will learn all about.

When a player decides to attend SJV there are a few things that you can take for granted. You know they have a competitive nature. You know they will develop each season. You know they will play against the best competition high school basketball can offer. The player who attends SJV knows there are no promises when they enter the school. They know in most cases they can go to just about any other school and start in most cases as a freshman. They know they can get stats at another school. They could brag about winning awards and have personal glory. But at SJV a player has to wait for such things. They must put there ego on hold. It’s also the reason why SJV players are different. Why they always go to the next level and shine. It’s why Ashley  O’Connor took the road less traveled. It why soon she will be a household name and Division 1 schools will come knocking at her door. ASHLEY O’CONNER  wants to be great and SJV is where greatness lives.

Ashley O’Connor #33 Freshman highlights https://t.co/t5WEEyRlrQ via @YouTube
she my friends is going to be special…learn the name NOW COACHES!

There are kids who you just have a chance to be special. Then there are kids you  know will be special. Ashley O’Connor is going to be special one day real soon. She will be special because she understands hard work and talent are a dangerous combination. She has both and she has hunger for coaching and competition. It’s why I tell college coaches all the time. SJV has another mega talented player in the system very few know about. I tell them learn her name now before others discover her. Ashley O’Conner is long and athletic, she is quick and smart. Her ability to get to spots is special all ready, as is her lighting pull up jumper.  Her ability to handle the ball and get by opponents is a gift. But above all that, she is such a wonderful teammate. It’s why she had the ability to attend SJV knowing their were 3  Division one seniors who played her position. She understood practicing and making her teammates better would make her better in the long run. It why she is a stronger much improved player this spring.

Ashley O’Connor plays for the New Jersey Belles 2021 team. They are a talented group who are all hard workers. Ashley Connor is not just a hard worker but rather a insane gym rat. Ashley O’ Connor is on the run all week. She comes to the hoop group when not practicing  to shoot sometimes for up to 2 hours at a time. On weekends before games it not uncommon for her to take as many as 1000 shots in a day. She goes to strength and condition 3 days a week. She does all this in a effort to become a better player. She attends NBS and I get to watch her against all the kids who are moving on to the Division 1 level. She will be joining those kids one day. She will join them because her skill sets seem to improve everyday. She will join them because she is that rare young player who loves to play defense. She will join them one day because she is so versatile. Ashley O’Connor can play all three guard spots. She can guard all three guard spots. If you need her to knock down the three no problem, if you need her to run the show and become a player maker…NO PROBLEM.  If there is one criticism of Ashley, it’s that she cares more about team then herself to often… but that’s a weakness all coaches would welcome.

This summer College Coaches are going to feel like Ashley O’Conner  just fell from the heavens. She has been around forever for those who know the top talent in the shore. Just like Jada Bonner and Maddie Doring and so many others before them. It will just take coaches a little longer to find her out about her. She like so many other talented SJV players decided that getting better. Playing real competition and challenging themselves in the long run serves them better. Ashley O’Conner knew this and it why she be wise to invest in a good pair of sunglasses…because her FUTURE IS SO BRIGHT.

“I  have know Ashley O’Connor for years. I have seen the development. I know the passion in her heart for basketball. She loves the game, she plays basketball not to get a scholarship or to read about her name in print. She plays basketball for two reasons. She really good at it and she enjoys being part of something special. I have not many kids over the years that is so pleasant and kind. She is a kid who enjoys getting better and being with teammates and friends. She is a kid who improves any culture she is part of …. It why I know she is going to a special player and teammate”.

Yesterday the signing period kicked off with a bang as kids across the state, signed their letters of intent. This is the signal for the final count down to the

The SCT seeding and tournament are right around the corner. But make no mistake there are some real important games left to be played. Last week, we saw some teams

Well hold on to your seat because the Shore Conference is getting ready to have a shift in power thanks to the new transfer rule. When state decided to allow