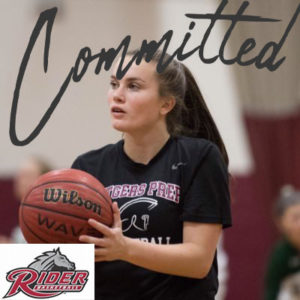 Yesterday Molly Lynch of Rutgers Prep made it a wrap. She became one of the first players in the 2020 class to verbal at a Division 1 school. Her choice was RIDER UNIVERSITY.

Molly Lynch made the bold move of transferring to Rutgers Prep after her freshman year. It was a bold and wise decision for the combo guard. Molly Lynch under the guidance of Coach Mary Klinger has  developed into a competitive battle tested player. Its no surprise that Lynch had multiple division one offers to choose from. In the end she choose Rider and Coach Milligan. Who for a second consecutive year signed a program type kid. Making it clear while Rider University wants talent. They value good kids as well. Molly Lynch is as good as it gets. 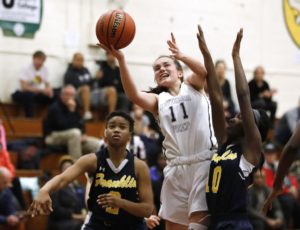 Molly Lynch will bring toughness and a real honest work ethic to Rider University. Lynch has built a reputation as a hard worker and a true teammate. She is easily one of the most well liked kids in basketball circles. It has not been a easy road to Rider University. She spent her freshman year at St. Rose watching from the bench and being in what many believe was the toughest basketball environment in the state. So she decided she wanted a new start and a drama free environment. 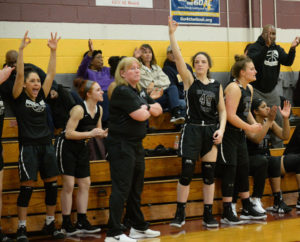 Molly Lynch joined her AAU Coach, Mary Klinger at RUTGERS PREP. Her trust in Coach Klinger, made the decision a very easy one. It was trust and real opportunity that Molly and her family were searching for; more than anything else.   After transferring she had to sit for 30 days before joining her new teammates. The wait and the risk was worth it because  in the last two  years, we have seen Molly Lynch grow into a talented player while finding a basketball family and home. It’s strange that  she is the first to verbal because Molly’s success has been a slow rise since 4th grade. She has longed wanted to be one of the best and play with the best. Now she has accomplished both and is the first to come off the Division one recruiting  board. 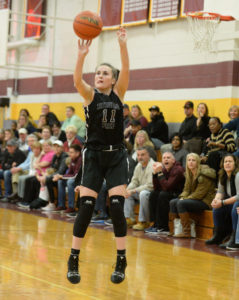 Molly Lynch averaged 7.5 point a game this season. On paper that may not jump off the page. But when it comes to Molly Lynch  stats mean very little. when you are discussing her impact. Stats don’t show hustle, toughness and the extra passes. Stat sheets don’t show leadership and desire. Stats don’t show what type of a teammate Molly Lynch as always been. Stats don’t show her value in the locker-room.  These are the things that had Division 1 coaches so desperately wanting her services. Molly is a classic “tell me what you need done, point guard” who can easily slide to the shooting guard position. When Rutgers needed scoring that exactly what she did against RBC, scoring 10 points and grabbing 11 rebounds. She had 11 points vs. Franklin because that’s what the game called for her to do. She had 17 points vs Piscataway because Rutgers prep needed that. In her game against her former teammates and St. Rose, Molly proved she could preform under pressure. She had 14 points in the big win because she needed to do that for herself. It was very clear last season Molly had elevated her game to a new level….A DIVISION ONE LEVEL. 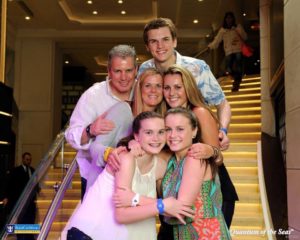 I have known Molly Lynch since she was in 4th grade. I remember when she wore googles bigger than her head. I remember the braces and teasing her about Rondo (well that’s a inside joke)  even back then, she made everyone in the gym smile. Her mother Tara is not a helicopter parent. She has provided Molly with balance and expectations. She has always made sure Molly has been surrounded by good people. When St. Rose did not appear to be the right place. She didn’t hesitate to have Molly switch schools with no promises being made except to get a fair chance. That’s  all she ever wanted for Molly in the first place, because she knew her daughter would be successful. Now her faith in her daughter has paid off in a big way. Today the Lynch family can all celebrate…TOGETHER! 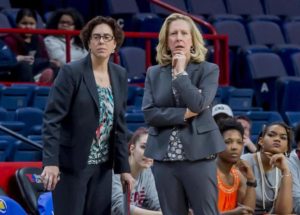 ider Head Coach Lynn Milligan and her asst. Pam Durkin are two of my favorite coaches. Their both so knowledgeable, talented and honest in the recruiting process. They also have made Rider a program to be reckon with these days. They won 24 games two years ago and this season won 19 games and was invited to the WNIT. Rider is now maybe just a elite post player away from playing with the big girls. They have a great recruiting class coming in next year. Then Molly will join the party the following year. I have no doubt, Molly will be even better in college. I believe she has a ready made college game. She has played against the best competition her entire life.  She shoots with range, has a nice handle and is a next level defender….everything is set for MOLLY LYNCH AND RIDER UNIVERSITY…..and it couldn’t happen to a better young lady….CONGRATS TO MOLLY LYNCH!