I TOLD YOU SO…JESS LOURO!

I told college coaches 4 years ago Jess Louro would be one of the best players in the Shore Conference one day… and I was right. But I never said she would be the Hoop Group Player of the year as a junior. That type of accomplishment is a once in a blue moon achievement for mega stars, that just came steam rolling though the Shore Conference. When I said she would be a star in the A-10 Conference that was another easy statement to make. But when I told mid major schools they had a rare opportunity to steal a future mega star at their level… most took to long to take my advice.  So when Jess Louro gave a verbal commitment to one of the best schools in the country, my only thought was …..I TOLD YOU SO… AGAIN! 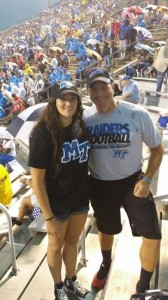 Dr. Louro your daughter is in Big Time now

“ANYONE can call their school a BCS type school or a Big Time program, but if you want that statement to ring true, some very important things must be in place”

YOU WANT TO BE BIG TIME…YOU BETTER PLAY AND BEAT THE BEST!

To be a big time school you need to separate yourself in a number of unique ways.  First, your coach must be wildly respected and mega successful. If your coach is in so many different Hall of Fame’s, people around town really should just call  him “Mr. Hall of Fame”; that’s a good start. If your coach has come up through the ranks not riding the name of some other well name coach or program, that’s really impressive. Because that means your coach did it the old fashion way and “EARNED IT”.  Maybe your coach was a High School Hall of Fame Coach first, so he knows a thing or two about building BIG TIME PROGRAMS. 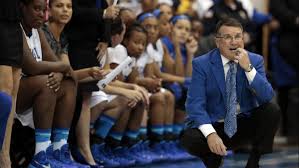 Your coach must build something special and lasting and must have vision the day he is hired and say such things as “if you dream big enough, one day it will happen” and then he must make it happen. Your Coach eventually must be one of the winning coaches in the country, for example maybe a .762 winning Pct; ranking them  8th in the country among Division 1 Head Coaches. Your coach must take your school to the post SEASON EVERY YEAR.  Your coach must win your Conference most years, 6 of 8 years would be a good number to start with...you said you were big time…not me!  In those rare years he doesn’t win the conference, your school must get an at large bid to the NCAA.

The way your coach accomplishes such things is by winning 20 games EVERY year, and then throws in two 30 win seasons while adding the nation’s longest winning streak in the country of 27 along the way. Your coaches team must be ranked in the Top 20 National Polls such as USA Today, ESPN, and both Associated Press outlets. Your coaches teams must knock off ranked opponents like #6 Kentucky, #5 LSU and play National Champions like U of Tennessee in an overtime WAR, in front of 11,00o fans AT HOME . …and just for fun, have DATELINE  do a story on your coach….JESS LOURO will play for such a coach his name is RICK ISNELL class of 1977 Middle Tennessee,  but you can just call him….MR. HALL OF FAME. 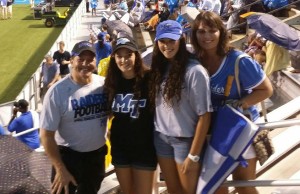 Before your school can start calling themselves,  BCS or a Big Time program, you better have big time talent. You may want to start with being one of 13 schools in the country with 1 player drafted in the WNBA over a 4 year period. You may want to have the nations leading scorer in the country in back to back seasons with different players.  You school would also be wise have a player who is one of the leading scorers in the country on their roster in most seasons.  You can’t tell me your team is BIG TIME, if you don’t have multiple  All Americans, as in FIRST TEAM ALL AMERICANS and having a Freshman All American doesn’t hurt either. You have need to have the Player of the year in your conference… say 4 times in 8 years….I’m sorry, you said you were big time, not me!..  JESS LOURO IS GOING TO A SCHOOL THAT HAS ALL OF THAT… 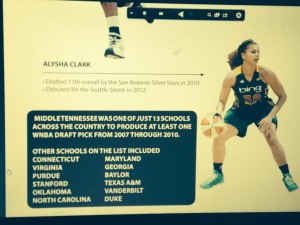 When you call yourself BCS or Big Time you need to play with the big girls. Your non- conference schedule must include the best of the best. You know teams that need no introduction, such as LSU, Maryland, Baylor, Tennessee, Kansas State, Arizona, Georgia Tech and others.... I’m sorry, you not feeling so interested in being big time anymore? Its not easy being big time, because you must be willing to play anyone, any day at any place. You must have a reputation for fearing no school. JESS LOURO IS GOING TO A SCHOOL WITH THAT REPUTATION. 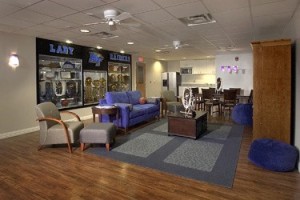 You still calling your school big time? Really? Then your school must have big time facilities. Like an 11,000 seat arena on campus with a state of the art locker-room. 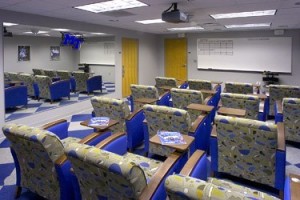 That includes a lounge area with a full Kitchen, computer work stations and meeting rooms. A 10,000 sq. ft. weight room and a full time strength and condition coach. Your school must have a full indoor Track and field center which is good enough to host your conferences championships and big time football stadium. Your players must a have nice place to go home to after a hard days work. Like at their OWN fully furbished personal room and personal shower. If your school has all this, maybe you are big time…my apologies! THE SCHOOL JESS LOURO WILL BE ATTENDING HAS ALL THIS AND MORE. 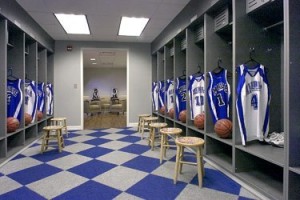 Now this is a Locker-Room!

Now if you want to really call yourself a big time program, the media and fans have to take interest in your team. Your games have to be an event, and excite the community. When your team travels to play opponents; your fans must follow like little children. Your team has to be one of the few woman’s college basketball teams in the country, that really does put butts in the seats. Its would help if your school is one of the top 25 schools in the country leading in attendance. You need to walk into the ticket office and hear the words “tonight’s game is  sold out”.  You need to have big time reporters like Mechelle Voepel do a feature on ESPN about your team. You need to have ESPN do a feature about the rise of your program on a nation level. Then most importantly you need exposure, like playing 69 games on National TV in an eight year period, no question, if your school has this type atmosphere you just may be big time JESS LOURO FOLKS IS GOING TO PLAY IN A BIG TIME ATMOSPHERE…EVERY NIGHT.

MTS is one the leaders in Attendance in the country!

Finally,  If you want to be big time, your schools asst coaches must be BIG TIME, and be sharks in the water…always circling the waters looking for talent. Your schools asst coaches must leave no rock un-turned and live the dream every day.  They must contact everyone or anyone that is in a recruits life. They must be aggressive in showing the love; through mail, text, phone calls and any other means to stay connected to a recruit. The recruit must send your asst coaches E mails to their friends and say for example “Tiny how cool is this” a recruit must be amazed by the volume of mail, that comes to the house EVERY SINGLE DAY. They must get the attention of the recruits sisters, brothers and family. They must make a recruit feel they are not only recruiting you but everyone in your life. Your asst coaches must travel day and night watching games of kids that live hundreds of miles away from your campus, say in Baltimore, Maryland for example. In other words your asst coaches must have been in recruiting wars and learned their lessons well. Then they must do the one thing that separates them from everyone else…Know how to evaluate better than everyone else and CLOSE THE DEAL, stealing great players away from bigger schools and catch mid major napping…JESS LOURO RAN INTO JUST THIS TYPE OF STAFF. 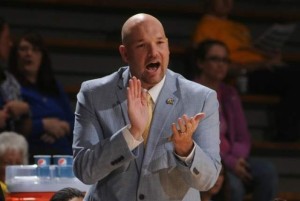 This is the face of a CLOSER!

MIDDLE TENNESSEE STATE is one of the BEST programs in the country and that is for any level. They are a BCS or BIG TIME program or whatever you want to call them. It is a program that only has interest in being the best. They do everything in a first class manner, I have never seen a school cover more bases in a in a recruiting process EVER and this is why the 2014 Hoop Group Player of the Year, Jess Louro will play for them the next 4 years. But the real deal breaker just may have been the fact Jess Louro’s brother will be 2 hours away and Middle Tennessee State is one of the few schools in the country that has her major SPORTS MEDICINE. 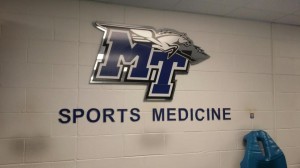 Another Dr. Louro is on the way!

There was a mid-major school that did all the right things while recruiting Jess Louro, except one…they could not close her fast enough. They gave Jess time, they didn’t pressure her, they didn’t bully her, they were honest, fair and classy. They were good people, not ruthless or self-motivated in there actions. But in recruiting, these wonderful qualities can sometimes work against you  in the end. 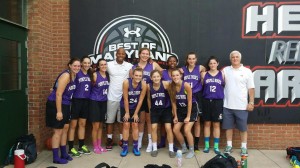 Sometimes you do a great job in recruiting and it doesn’t work out, I BEEN THERE, SO I KNOW THE PAIN. It happens in recruiting sometimes and all parties are hurt. Why? Often you become friends in the recruiting process, and basketball has nothing to do with how you feel about each other. Its like losing your best friend, when you choose another school.  Jess Louro, over the pass few weeks told me she really liked the staff of this Mid Major and we had some real heart felt conversations about that school, I can assure you it was a painful for her to call to them with the bad news. 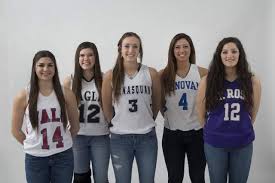 For the many coaches (some are good friends),  lighting up Jess Louro’s  phone the past 3 weeks, begging for a visit,  to those in desperate need,begging and asking for a return phone call, to those asking her to promise she wouldn’t make a decision until she visited their school and to those offering scholarships months later…I SAY ONE THING…I TOLD YOU SO. 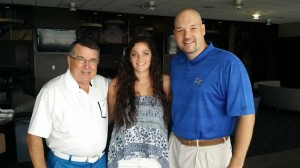 “Its over, I’ve made my decision …I gave Middle Tennessee State a VERBAL”  Jess Louro

Congrats to Jess Louro on her verbal Commitment to MIDDLE TENNESSEE STATE…oh yeah…Did I say…..I TOLD YOU SO? 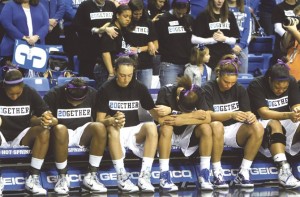 Hey Jess this is how we do it in the big time..READ OUR SHIRTS!

IMPORTANT UPDATE– ALL NBS MEMBERS ARE ASKED TO PLEASE SHOW UP 30 MINS PRIOR TO THE START OF THEIR SESSION, THIS SATURDAY.