I sat down today and was prepared to write about the Colt’s Neck basketball team. Then I realized that I have a relative that fits right up the Colts Neck teams alley. The Colts Neck team doesn’t get much respect, but after watching them play I know these kids have bright futures, it just may take people longer to notice them.  My Nephew Trevor vanRiemsdyk is someone the Colts Neck kids, maybe… just maybe… have something in common. 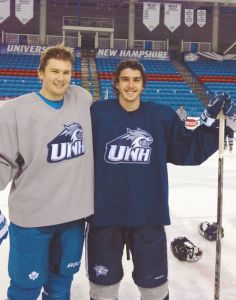 The Boys hanging out at UNH…

When Trevor was younger, he watched his older brother develop into one of the best hockey players in the country. James was the 2nd overall pick in the entire NHL draft when he was only 18.  Last year he played for the USA Olympic Team. Now I’m far from a hockey expert, but even at a young age I knew James was going to be special. His feel for the game and his total commitment to hockey was something I had never seen by any kid in any sport. When he was a little kid at 4 or 5 whenever I came to visit the first thing he wanted to do was shoot pucks at me. I would talk trash and he would fire pucks… scoring most of the time (I was the first brother he ever scored on).

James was one of the rare ones and left CBA after scoring the winning goal in the the State Championship during his sophomore year . He was recruited by every major college team in the country after playing for the Junior National team in Michigan. He is starting for the Toronto Maple Leafs these days. James road was kind of predictable.  He had an amazing raw talent with a work ethic that you simply cannot understand unless you see it up close. When kids tell how hard they work or want to play in the NBA I chuckle…because the price is such a high one to pay to get to that level.

This brings me to Trevor, whose road to the NHL has been so much different. First Trevor looks like he is 10 years old and has always looked younger than his his age. Next Trevor is sneaky quiet, meaning you think he is quiet …when he is not. He is quick to crack a joke or in my case laugh at me when I talk smack.  When Trevor was younger he always seemed to be in the background but its strange, any game we played he won. When we would all line up to play knock out, I would talk trash to try to get him off his game, but it never seemed to faze him, he’d usually end up winning. When we would play one on one, I’d say stuff like I’m going to dunk on a “white boy today”.  He’d laugh and dunk on me  just to make a point. He had this low key approach toward almost everything but was very competitive. I would take him to the basement to play Ping Pong for hours and I can honestly say I never beat him and I was cheating my ass off. Trevor just liked  beating the odds. 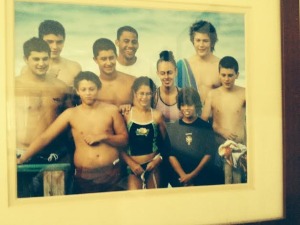 When Trevor finished his sophomore year I expected him to ship off to Michigan like James, but he didn’t because he liked hanging out with his friends and that was not his cup of tea. Then when he finished high school no big schools came calling. I was worried that maybe Trevor would not reach the heights that I know he wanted to reach..big time hockey! When I went to visit my daughter at Colgate I stopped in on the Hockey Coach and started to brag how good Trevor was and the coach showed little if any interest….truth be told I was pissed because he didn’t even fake it. I thought to myself, don’t these people know how much hockey this kid plays? So when his parents, Frans and Allison started telling me about all these top Academic Schools he was looking at I was shocked. He had some of the best schools in the country Academically looking at him. But damm this cat was a hockey player! 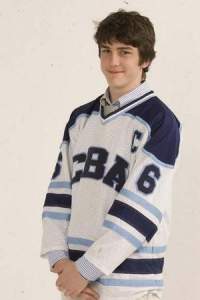 I the end Trevor delayed going to college to play for a club team (NH Monarchs) and took classes at a near by college. He was forced  to prove himself and he had to do it with a target on his back. The name vanRiemsdyk was becoming a household hockey name and opponents gave a little extra and talked smack along the way. The smack talking was a waste of time because I talked enough smack to Trevor that would last a lifetime. But Trevor’s time with the club was well spent. He got stronger and more importantly created his own Identity. But still there were not a lot of schools calling.

When Trevor heard about  The Chicago Showcase  which some of the best high school hockey players in the country attend, he decided to join them. Trevor is not one to make any predictions.  His attitude was to attend, play hard and enjoy himself. But what happen next is what may have got the ball rolling. They say all it takes is being in the right place at the right time to change someone’s life. In this case the junior camp was that place for Trevor.  He started the camp as an after thought and left with the MVP and all of sudden schools started calling…we are talking BIG schools. Trevor had finally caught the eye of top hockey programs and had to make a decision.

When the UNH hockey team plays the town shuts down. But UNH is also a great place. How great you ask? Well Trevor’s brother James encouraged him to attend and more importantly James turned downs millions to stay a extra year in  college…despite me saying take the money…take the money. When Trevor arrived at UNH, most thought he was just riding the coat tails of his older brother. But who would ever believe that Trevor would become an All American at UNH and a Hobey baker Trophy finalist for best player in the country (something his brother never accomplished).  Well Trevor has been used to being pushed aside and this was just another small victory along the way.

During his senior year Trevor suffered a season ending injury and with it his Hobey Baker Trophy chance went out the window. What amazed me is when I spoke to him, it was clear he really didn’t care. What he talked about was his coach and how much he just wanted to win a National Championship for him. He felt the man had done so much for him along the way. 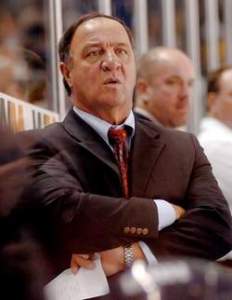 Trevor wanted to win a National title for Dick Umile

When Trevor decided to turn pro, he was a free agent and could pick any team because he was not drafted out of high school. James advised him along the way and it was clear the Blackhawks was the best place. But the roster was stacked with little chance for a rookie. James told Trevor think about the organization and development. I don’t know jack about hockey but after watching James in the NHL for 5 years I know one thing…GOOD PEOPLE ARE A MUST FOR YOUNG PROFESSIONALS. Phoneys can ruin a career of a young player if they’re not on top of their game. I grew up as street guy so I pay attention to this stuff and KNOW! 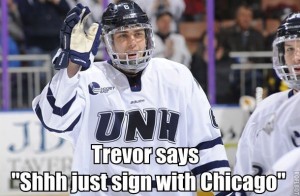 This summer Trevor went to Minnesota and trained with his brother James. When they would come back for a few weeks to train in Conn, I talked trash to him like the old times, because as everyone knows, that’s what I do.  But in reality, I knew he was a beast.  His body had 4% fat and he was a freaking machine. I couldn’t believe how strong he was and I have coached a few NBA guys in my day…they had nothing on Trevor. The dude was  ready to roll. He told me he was going to Sweden to work with some old school NHL guys who names I can’t pronounce.  It seemed like the right move to make.

When the BlackHawks training camp started my advice to Trevor was to just be ready. He said he just wanted to learn the ropes and do his best. I think he had little thoughts of making the team. But then something that has never happen to Trevor took place, he was getting praise at the START of trying to accomplish something. His whole career he has had to work from the bottom up. He fully expected to start the year in the minors and work his way up. It’s been that way his entire life and that’s what he expected in the NHL. But no… the coaching staff really thought he might be ready.

It was beautiful night on the Navasink River.  Frans and I were just cruising around and he said, “I got a feeling Trevor has a chance to stick with the big club.”  I said great cause I’m trying to get a boat like this too…lol. We laughed and he said the Blackhawks are playing at MSG Friday. I went to my stand by excuse for everything and  blamed  Rob Kennedy and said I couldn’t go. But then I watched the game on TV and I was like “damm he is really looking like he belongs.”  My daughter was texting me updates during the game. It was a great night as Trevor’s family and friends got to see him at the Garden before the NHL cuts. But when I called his dad on Tuesday afternoon and asked if he had heard anything..Frans said ” he made the club.” 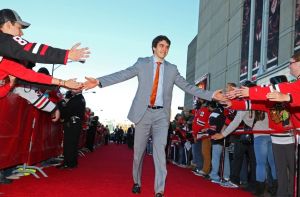 Now this gets me back to these Colts Neck kids.  They all appear quiet and don’t bring a lot of attention to themselves. But I have the same feeling about them I had about Trevor… They’re being asked to take the long road to recognition. Tomorrow I hope I can make that road just a little shorter!

Along the way nobody really ever gave Trevor credit or paid a whole lot of attention to his journey. But he worked his butt off  and did all the little things. He didn’t try to get to the highest level by using his so called name or reputation. He didn’t take short cuts or ask for favors. Trevor stayed the course and I am proud of him.  Not because he is family…but because he took the long road and didn’t mind the ride.  He understood time can be a friend if you are willing to work through the bumps and disappointments….In closing I have a message for Trevor…. you still can’t guard me sucker and I brought  my own Blackhawk Hat and I’m selling it on E-Bay the moment I jack you up and make you sign it…..still taking trash but now to a NHL player! 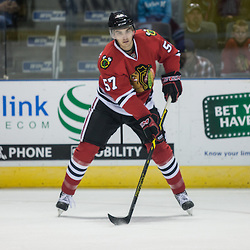 It’s not where you start kids..its where you finish!