Today we spotlight the first of Central Jersey’s Notably AAU teams, which we will spotlight over the next few weeks in no particular….  The Central Jersey Hawks Chambers Team!  Anytime you are talking AAU and the name Chambers is attached to it you know its run the right way and the players will get better as summer rolls along.  This year’s version of Chambers team is loaded with quality post players, stud young guards and a few players already committed to Division one schools. There is a lot for coaches of all levels on this team. 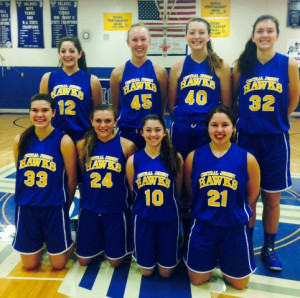 COACH – MARY BETH CHAMBERS– The track record speaks for itself. She has sent over 20 players to division one schools in the past 3 years alone. Not only do they get scholarships, but they become impact players at the next level.  She is one of the best shooting instructors I have personally ever seen. Have you ever seen a bad shooting Chambers team?  Her teams play team basketball and share the ball and the playing time. She gets the kids to understand scoring is not the be all… do all. She demands all players play defense, box out and work on any weakness in their games. Pay close attention to this next statement, many of her kids start the year with no reputations and wind up in D1 uniforms. Army Prep bound Ellen Dougherty was 1st Team All Shore selection this past year and Haley Unger signed with Navy…neither started the summer as D1 prospects…Mary Beth Chambers is one of the best in the business.

JESS LOURO-5’9”- Senior-St. Rose High School-Combo Guard– She was named THE HOOP GROUP SHORE CONFERENCE PLAYER OF THE YEAR and was named to the ASBURY PRESS ALL SHORE FIRST TEAM. This gym rat is the total package; she is one of the few girls who can bury 3 point shots as a spot up shooter or off the dribble… She will post up smaller guards and push the ball in transition due to her unique passing skills and size. Her on ball quickness…UNDERRRATED! LOVES COMPTETION AND BIG STAGES.  Will be considered of the best players in New Jersey next year and will be heavily recruited.  I believe she is already an AAC /Atlantic 10 type player… The real question is where is the ceiling ENDS!

ANDIE LENNON-5’5”-Senior-Secaucus High School-Pure Point Guard– She was FIRST TEAM ALL HUDSON COUNTY.  She is a true point guard but more importantly a winner. Scored her 1000th point this season, is tough as nails, as she is willing to take charges and win 50/50 balls, a real competitor.  Has the ability to knock down 3’s and finish at the rim. This young lady has not hit the radar yet but with the exposure she will get playing for the Hawks, she may find many schools have will an interest in her future….GREAT UPSIDE  for a true winner and Sleeper prospect

GRACE STANT-6’0” Senior- Rumson High School- Swing–– She has given a verbal commitment to Villanova of the AAC . One of the top performers in the shore the past two years, she was a HOOP GROUP and ASBURY PARK PRESS 2nd TEAM ALL SHORE MEMBER and was a MVP at BATTLE OF THE BOARDWALK. Has a college ready body with the ability to handle the ball on the perimeter. She can knock down open 3’s and get into the lane.  She is murder on teams in close games as she can handle the ball and get to the foul line. Can defend multiple positions and rebound in traffic. Will live at the foul at the next level and her upside is scary. Look for her to take another step forward this summer.

MORGAN GRAZIANO – 6’2’- Senior- Holmdel High School- Forward– She will be one of the most in demand post kids by the time the summer recruiting period ends.  Calling her a great athlete is an insult. She has quick hops off the floor, fast and strong hands, but more important than all that is this…SHE IS THAT RARE BIG PLAYER YOU CAN COACH HARD! This young lady will get better every night. She had big night’s vs Top Shore Competition this season.   She will bury 18 foot jumpers and finish around the rim, but notice the passing skills. She can play a physical or a finesse game, has decided not to verbal and play out the summer despite Division one offers. The Upside on this young lady is insane, a summer with the Hawks will no doubt see her stock soar because like all Chambers bigs, she will improve even more in the summer… Already has a D1 offers so it’s really about her challenging herself…

Graziano Video and she better NOW–

STEPH KARCZ-5’9”-Junior- Middletown South-Combo Guard– Already considered one of the best players in the state. She was a HOOP GROUP AND ASBURY PARK PRESS FIRST TEAM member as a sophomore this past season. Has a major college body already. One of the most physically gifted guards I have seen in recent years. Blessed with blazing quickness and hand speed, she is already one the elite defenders in the state. Karcz led her High School to its first State title in 18 years in a win over Neptune. She will spend the summer continuing to develop her shooting SKILLS with the shooting Guru herself Mary Beth Chambers. Too be honest if you don’t know who she is your living in a cave…No question she  is a Division 1 player, maybe even a  possible BCS level player with development. Rare talent and expect her to make a major jump this summer.

ALEX BARAZOTTI-5’7”–Senior-Red Bank Catholic- Combo Guard– ALL HOOP GROUP the  past two years and the leader of Joe Montano’s RBC babies this year. She was a major player in RBC winning the Shore Conference Title last year. With her Ball Handling skills improving every day to go along with the sweet shooting stoke, Barazotti is a Division One LOCK!  Coaches who are paying attention will notice her amazing interior passing skills and her ability to find open shooters.  She is undersized but plays way bigger due to her strength and quickness of the dribble. Her deep shooting range is a major factor every time she steps on the floor….This is another Mary Beth Chambers special, another kid who will take a giant step this summer…She is a great teammate, a warrior and any program she has been apart of has been a winner.

Alex Brarzotti was Most Improved player a year ago–

Tori Wagner-6’3”-Senior-Freehold Twp.-Center- St. Francis got a steal of steals in Tori Wagner. She is a total gym rat and gets better every day. I believe St. Francis stole an A-10 level of player in time. Rare leadership skills in a post player in that she is very vocal and a total team player. Another kid you can coach hard and accepts coaching willingly. Loves competition and has shooting range to 18 which is growing daily, thanks to Mary Beth Chambers. MAJOR STEAL BY ST. FRANCIS OF NY….HIGHWAY ROBBERY WOULD BE ANOTHER TERM.

KAT PHIPPS- 5’7”-Senior – St. Rose-Shooting Guard– Other steal by St. Francis of NY…I am not sure a NEC school has ever come to the Shore and got two such players…EARLY! Phipps is one of the best shooters in the Shore if not the state.  She is also one of the most physical guards in the shore as she relishes any type of contact going to the rim. Her Shooting range is anywhere in the building. But most importantly she is another gym rat, who is constantly working on any weakness in her game…ST FRANCIS IS GETTING A FUTURE ALL CONFERENCE GUARD.

FINAL THOUGHTS– This is one of the best groups in the state. They always play in the toughest bracket of any AAU event they enter. The players train and play year round. Unlike a lot of AAU programs, there are no stars and everyone shares time and the spotlight…. DRAMA FREE must see team for DIVISION ONE SCHOOLS….