The AAU season is over and now all the movement begins. Players will change teams; coaches will look for new players and in some cases new teams to coach. There will be new teams started and some programs will join forces. Parents with  players in demand will use their clout and talk to a number of teams. Some of their conversations will be honest and up front, some will be half-truths and some will be lies. This is all part of the dance that takes place in AAU this time of year. Some of these movements will go smoothly and some won’t. Some people will take decisions personally and some understand its part of a not so nice process at times. Some kids will find homes while others will be left out in the cold to fend for themselves. In the end one thing I can promise will happen….everyone will have to make some hard decisions that often times affect relationships FOREVER. .So I want to pass some advice along to the AAU crowd. 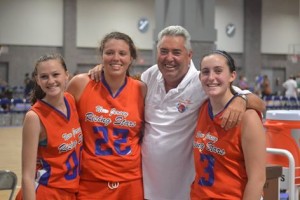 Don’t be surprise if during the process a coach or a parent hasn’t been honest with you. Because as I have said many times in the past, if you think anyone in AAU is going to be loyal to you or your child…. I have bridge to sell you. This is why I say …. “DO WHAT IS BEST FOR YOUR CHILD”. This may include staying with a team, leaving a time, demanding time, and asking for special arrangements, to flat out not playing AAU. Know this, AAU is not high school, the best players carry all the weight and in most cases their parents set and make the rules…and that’s never changing!

AAU is not a easy world to navigate.

When picking or joining an AAU team, know the history and makeup of that team, before you join not after. If you are playing on a team with players who jump from team to team each year….NEWSFLASH they are not in it for the long run. If you hear a team is unorganized, I can promise you in MOST cases they are unorganized. But if you hear parents bad mouthing a team because of morale issues, practice issues, training issues or character issues don’t believe it MOST cases…because if you are expecting an AAU coach to teach your child these things, you seriously need to have your head examined. Most KIDS leave teams for 4 reasons… playing time, poor exposure, jealousy or drama among parents.

If you are on an AAU team that does not get exposure and doesn’t have a history of sending kids to college, you better be on a great high school team. College coaches are not in the business of watching players and teams with no name recognition. If your team is loaded with D2 and D3 players, then D2 and D3 Schools are coming to watch your team. If you team is loaded with D1 players, then D1 colleges will be coming to watch your games and don’t let anyone tell you different! 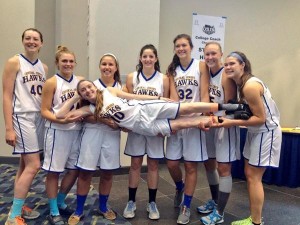 Beth Chambers team had no problem attracting coaches..Every Players has a full D1 scholarship offer or has verbaled

If your AAU coach is acting as you trainer and coach, you better ask is what is their background and do they have a history of success and developing players. Because often times a coach wants control and wants to feel they have juice with the kid and the family. I have no better example of this, than this short story; a talented 8th grader was attending NBS in the spring and playing with and against 9 D1 wing players every week and then her AAU coach told her it would be better to skip NBS to attend his 8th grade workouts…folks you can’t make this stuff up…laughable but sadly true and it won’t be the last time. 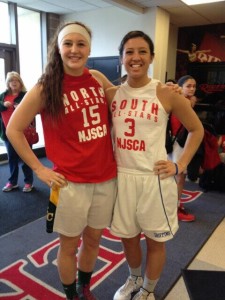 Never pick an AAU team that doesn’t have your child’s best interest at heart. What is in your child’s best interest? That they get playing time at their position, offensively and defensively in front of college coaches, during the recruiting period. Anytime a Coach talks about winning an AAU game over your child’s playing time or exposure….RUN FOR THE HILLS…AAU is about 3 things and 3 things only…catching the attention of college coaches, personal development as a basketball player and quality competition, NOT a AAU coach proving how great of coach they are…

Finally everyone should remember this about AAU, don’t take it personal when kids stay or switch teams. In most cases the reasons are legit, even when the parents or a kid have not been honest (It’s harder to be honest to people you like when what you say will hurt their feelings). Nobody has ever said AAU is fair, AAU was not built that way….AAU is hard on a lot of good people, including coaches, parents and kids. The kids want to play and get exposure, while the parents want a fair shake. Sometimes the two don’t and can’t go hand in hand. The AAU coaches almost always feel like they are the bad guys when all they do is give a kid an opportunity only to be disrespected in the end….my final advice, KIDS BE MORE CONCERNED WITH YOU DEVELOPMENT….Because if you’re not good enough, it won’t matter what AAU team your own.