JOE MONTANO HAS A PLAN…RBC WINS! 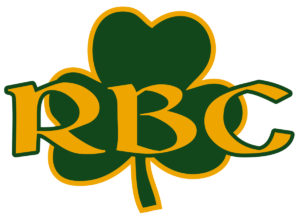 THE YANKEES of girls basketball get a big win.

Joe Montano is relentless, he also has seen it all during his years at RBC. That would also include seeing great opposing players. Yesterday Joe Montano came up with his best plan of the year. First he moved his jr shooting star, Hayley Moore into the starting lineup. The other part of that plan involded slowing down the best player in New Jersey. It also meant sticking to this plan, that for most of the afternoon appeared to be not working. But Joe Montano does not panic and yesterday, he was relentless on the sidelines. Just ask the the SJV FAITHFUL.. 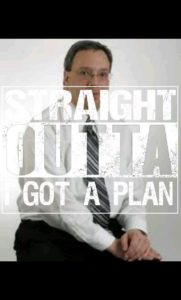 In what was a battle of titans in front of a packed house. Two of the best teams in New Jersey went head to head, toe to toe and one had to break. RBC refused to be that team, no matter how many times SJV had them on the ropes. Joe Montano’s decision to start Hayley Moore had more to do with this, than anything else. Moore started the day out by knocking down a three to open the scoring and she never  stopped the rest of the afternoon. She was deadly all afternoon and had ice in veins as she hit big shot after big shot; every time SJV tired to run away and hide. She also played stella defense all night. She did this in front of her future college coach. She was the one player that SJV could not account for all afternoon….her 23 points were destabilizing to SJV. 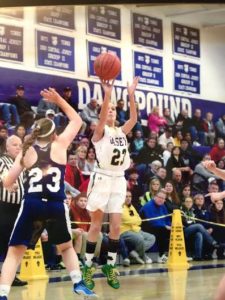 HAYLEY MOORE had ice in her veins all afternoon

RBC is a team loaded with stars and more importantly shooters and scorers. On most nights HAYLEY MOORE comes off the bench to provide instant offense. But on this day, Joe Montano needed just a little …”MOORE”. Because RBC’s most important player Jose Larkins was chased and hounded all afternoon. SJV refused to allow Jose Larkins any daylight. So Hayley Moore did the work of two… for most of the night. But it was her teammates that made it happen for her and the RBC home crowd down the stretch. 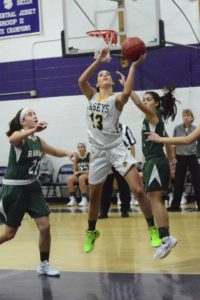 Joe Montano made another big decision yesterday  …that KIMI EVANS would not beat his team. Joe Montano picked his poison and it was the SJV supporting case. He had rough and tough jr swing KATIE RICE front Kimi Evans and then the rest of his team was  ALL hands on deck on the weak side. There were times Evans saw 3 players rotationing on the weakside. They bumped, pushed and grabbed grabbed her if necessary. They were physical with Evans, every step of the way. While the best sideline coach on planet earth worked the officials in classic JOE MONTANO style. His game plan was not only brilliant but gutsy. Because for three quarters it looked like his plan was failing. 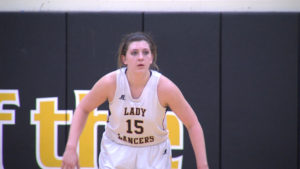 For three quarters, as RBC circled the wagons around Kimi Evans, SJV took target practice. Sarah Karpell and Julia Ramos banged out wide open three’s. Sophomore Brelynn Bellamy basically went unguarded and drove to the basket for easy layups. Towards the end of the first half it looked as if SJV just might run away from RBC… as they went into the half up nine.

When the 2nd half started, Hayley Moore did what she did to start the game. She banged out a jumper and cut the lead to 7. But SJV came right back and saw there lead at times balloon to 11 points. But every time SJV wanted to run and hide, it seems Hayley Moore would knock down a three or Joe Montano would call a time out. The  SJV PRESS did not force those turnovers, that crush most teams hopes. More importantly RBC’s with Maureen Coakley joining Katie Rice continued there assault of a clearly visible upset Kimi Evans. But what nobody was noticing as the  3rd quarter came to a close with SJV UP 9….SJV should have been up by much more. First they missed what only can be called an extraordinary amount of wide open uncontested layups. But maybe worst they missed wide open jump shots. The noose around Kimi Evans would tighten more…. as in Hayley Moore. 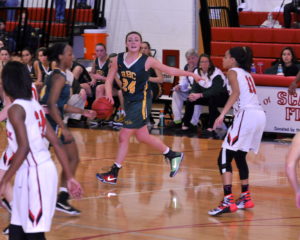 Elite Point Guards find there shooters. ROSE CAVERLY is as elite as there is…

It’s the 4th quarter when SJV breaks most teams. Its when there bench and press makes opponents beg for mercy. But RBC is not like most teams. It was SJV who seem to run out of answers. First they missed layups and open jumpers they made earlier. Then Hayley Moore’s teammates woke up on offense. First they set. Moore up her with sweet passes and then went to work for themselves. Tia Montange banged out long jumper to get the ball rolling…when Amanda Hart banged out a three in the corner. It was now SJV who was on the ropes. But when they missed two easy put backs layups, Coach Karpell must have felt she was in the Twilight Zone. But it was not until SJV’s press turned RBC over and they had a wide open totally uncontested layup, roll out…did it get downright bizzare. While all this was going on. Katie Rice  came to life on offense in the 4th quarter. She attacked the rim for a layup. They got to the free throw line for a easy two. She also had time to find Hayley Moore on a sweet backdoor pass, that gave RBC a temporary lead. Katie Rice got downright nasty in the 4th quarter and before SJV could say ..Were in a dog fight. ROSE CAVERLY made the pass of the year. She showed why she is the most in demand jr point guard in the state. They say size kills, well so does strenght, and Miss Caverly has both. She threw a bullet cross court to the left deep corner from two steps over half court from the right side, to who else? HAYLEY MOORE WHO WENT BANG FOR THE 5TH TIME..and just like that.. it was a tie game and GAME ON. 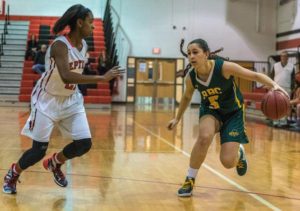 Stars are stars, because they know when to shine. SJV hounded JOSIE LARKINS and hung to her like a cheap suit, all afternoon. But when SJV switched to zone for the first time of the night…LARKINS like all stars do, made them pay dearly. In what was the biggest shot of the day, Larkins knocked down a wide open three and RBC had completely erased a SJV lead and took a lead they would never relinquish.

Joe Montano has a special group and his game plan was perfect. Tuesday, he and the rest of the Yankees will be playing in the biggest game of the year; in the state of NEW JERSEY…he most likey will tell his team, everyone will need to give just a little “MOORE”