BRIELLE  BISOGNO has done just about everything we expected her to do when she entered high school. She has accomplished just about everything she set out to do. She stayed and played at her local high school and helped make TOM RIVER NORTH a powerhouse. Over her 4 years, they have won a Group IV start title, A South Divisional titles and been ranked in the Top 20. “sweet “B” has had a career that others can only dream about….SHE HAS DONE SOME RARE STUFF! 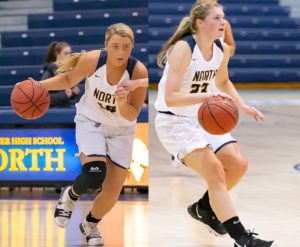 BISOGNO and PAUL added another A SOUTH title to their legacy

This was a year many teams in A SOUTH, thought TRN was ripe for the picking. TRN had Brielle Bisogno and Jenna Paul returning, but the rest of the team were young or inexperienced. But with Bisogno and Paul leading the way. TRN this past Friday put any hopes of a new Queen in A South. They beat a talented Jackson Memorial to win A South, once again. It’s been that way since the two entered TRN. There last  divisional  Game ended the way, everyone expected …BISOGNO AND PAUL HUGGING, after a big win. 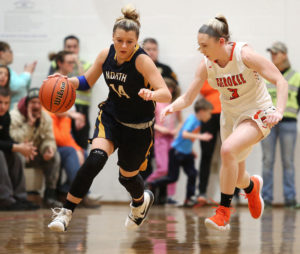 Kylie Watson, Jenna Paul, Lola Mullaney and Brielle Bisogno all played AAU on the Tom’s River Starzs together. Today they are some of  high schools biggest names. The Starzs was a team made up of future mega stars and D1 players. They all got along  fabulously and played together like a fine tuned instrument.  But the snakes got them and the team broke up. Kylie Watson many consider is the best player in the junior class, has offers from everyone. Jenna Paul will attend Colgate University, she broke the TRN all time scoring record. Lola Mullaney will attend Harvard and some believe is the best player in the state these days. They have all scored over a thousand points. They are all household names. Yesterday, Brielle Bisogno did something many never thought was possible. She joined her former teammates in basketball mortality.

Sometime in the next two weeks Brielle Bisogno, will make a verbal commitment to D1 school. That ‘s really no big surprise, what was a surprise is that she took this long to make a decision. Now what is a surprise, is that yesterday  Brielle “sweet B” Bisogno scored her 100oth  point. It was a surprise  because she accomplished this feat, in less than 3 years. But what’s more remarkable is that she sat out her entire Sophomore year. Then played her junior trying trying to regain her talent. That aggressive defense style of ball hawking and taking charges. That break neck pace on offense, the insane spins and jumpers. BISOGNO was  patiently waiting for all those things to return as time slipped away, her ex teammates and other seniors signed at D1 schools and cracked the 100th point mark. She watched it all happen for her friends. She is no longer watching because yesterday she joined the 100th Point club. So now when she announces her D1 college of choice. There will be nothing left, except to win as many games as possible to extend her high school career. BISOGNO has  accomplished more that anyone thought was humanly possible in 3 years. 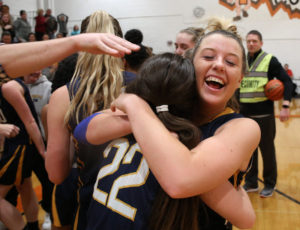 Two years ago Brielle watched her teammates lose in the state sectional final to  Cherokee high school . She was heart broken because she couldn’t help her teammates, due to the torn ACL injury. A year later she would make  it up to her teammates by scoring a game winning bucket on a mad dash to the rim to send TRN  back to the  sectional final  against Cherokee for a second year in a row. This time with Brielle leading the way….TRN WON THE CHIP!  Brielle has won at every level of basketball. Her teammate Jenna Paul has been there every step of the way. So it’s only natural she got her 1000th point with Jenna smiling the entire time. Everyone smiles when talking about Brielle Bisogno. It’s because she makes everyone around her feel better.

Bisogno, getting 1000 points in 3 years is impressive. But remember she has always been a pass first, defensive point guard first. The points are a product of how hard she plays. So in a couple of weeks, I will be BACK HERE WRITING ANOTHER BLOGb about Brielle. I ill print out a big poster with her name and future  school on it. Everyone is going to be happy for “SWEET B”…. but when her name is added to the TRN 1000 point club banner….everybody who knows will say….wow, she did  all that in least than 3 years, while still being a REAL TEAMMATE?….that’s RARE STUFF, even for BRIELLE BISOGNO 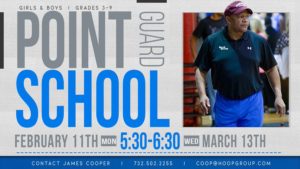