THE REAL PRESSURE IS ON THE COACHES

This weekend is the only time that Division one college coaches are allowed out for an AAU event in the fall. Division 2 and 3 school will be holding their breath, hoping that nobody steals a player who could be impact player for years, that they have been recruiting. Some kids believe this is the, be all of do all weekends. The problem is nothing can be further from the truth. The real pressure this weekend in a lot of ways is dead smack on the college coaches. 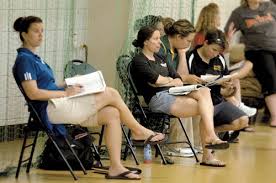 The real pressure is on college coaches

This weekend, college coaches will be making a number of decisions that will affect a lot of people. Most colleges are doing the following this weekend. First they are watching the players who have given them verbal commitments and the players who have not made a decision on college, that are still considering their school. Next they are watching those juniors they have offered, or considering offering.  Finally there are a group of players some schools are watching and giving a final look at. These are the players who have shown something in the summer but not quite enough for a school to pull the trigger. In many cases these players are the kids who many colleges will eventually offer down the road. Because a number of schools will get the bad news at some point that the player they so desperately wanted is going to another school. Then there will be those schools that thought they were getting a player that a bigger school comes in late, often after losing a top recruit and steals the smaller schools top choice. You see this time of year is not easy on college coaches. The good news for players who are seniors in particular is this…Teams have to fill out rosters and fill needs and it will not always be there first choice who ends up wearing their uniform.

Now players have a lot things they can do before the weekend, to help themselves in the recruiting process. First and most important, do not be afraid to call college coaches. There is nothing like name recognition for college coaches, when a coach hears from a player directly they know that player has a sincere interest in their program. More importantly if a coach can see that player play at some point more often than not, they will take the time to watch that player. Next and maybe more important, a player can send their weekend schedule, threw twitter, Facebook, email and personal letters. None of this assures a player a coach will watch them this weekend. But what it does do is give that player NAME RECOGNITION! This will come in very handily after this weekend. 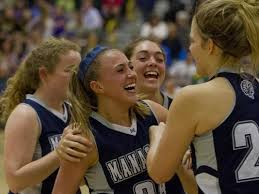 Courtney Hagaman is a great example of name recognition growing

After this weekend colleges will spend all their recruiting days at open gyms. This when college coaches  go to high schools and look for kids who may have been missed during the process, who they believe can fill a need. Some are giving a junior player they may plan to offer some love. But some colleges, and let me change that to many colleges, during this period are in full out scramble mode, they may need to find a player before the signing period in November or create a new list of possible recruits. I will tell you that the two positions most school struggle with during this time are Post Players and Point Guards. There just never seems to enough true point guards and post players to go around.

Chelsea Crowe is going to find out point guards are in full demand!

There are always schools who say they are done recruiting for the year. Nothing makes me laugh harder than this statement. Kids change their mind about colleges all the time, kids transfer all the time, kids can’t handle the academic part of college all the time. Then finally there are always kids who have personal issues and are asked to leave a college. Take a look at almost EVERY roster and each year somebody who was supposed to return… does not. The recruiting process is something that never ends each year. The needs of college basketball team can change at any time; this is why most colleges have recruiting meeting every day in other words “RECRUIT DAILY OR PERISH”

There is no need for kids to feel pressure this weekend, college coaches on the other hand…they have the real pressure, it their jobs.  This is not a “LIVE OR DIE” weekend for players, it just another step in the process. There is a lifetime of recruiting left before this year is over.  I say be prepared, send you information to college coaches and cover all bases. Make sure somebody is a big advocate for you and that create that all important name recognition BEFORE you get to your playing destination. The pressure in on the coaches not you folks…BUT YOU MUST REMEMBER …..GET BETTER EVERYDAY!

MANASQUAN IS HAVING AN OPEN GYM NEXT TUESDAY