St. Rose Everyone Eats vs Manasquan

Last night in a battle of heavyweights (ST. ROSE vs. MANASQUAN)many believed Squan was in trouble. There were few folks picking the warriors to win. So win baby Georgia Heine knocked down a three. It gave Manasquan a 10-5 lead. It also was a sign that Manasquan’s inexperienced role players might be ready for the moment; key word MIGHT. It would be the only points anyone on Manasquan not named Masonious or Mullaney would score.

Right after Heine’s three, it all went down hill for Manasquan. Because ABBY ANTOGONLI responed by slipping behind the St. Rose defense for a easy run out and was fouled. It would be three of nine uncontested points on run outs by Antogonli. It also was the reason St. Rose ran  Manasquan out on there home court. 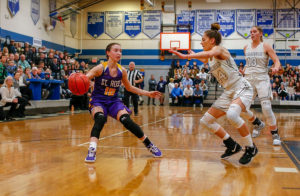 Trust is a big thing for any team. No team had there  trust questioned more before the season, than ST. ROSE.  Trust must be earned even in sports. Last night the so called role players for St. Rose earned each others trust.  With Abby ANTOGONLI setting the tone for St. Rose while  Brynn Farrell sat with foul trouble.  St Rose once again dominated a top ranked team in New Jersey. They shared the ball and  every player got to eat at the table. They also played defense and rebounded the ball. Three areas Coach Chambers vowed her team would do this year. She trusted her team woud be fine without Brynn Farrell….THEY REWARDED HER TRUST!

Manasquan has two stars in Lola Mullaney and Faith Masonious. Early last night they tired to get there teammates involved. But after watching missed free throws, turnovers, air balls and missed layups. They realized there teammates needed more time. They barked at there young players not in rhe right spots or worse in the way.  The two stars lost trust in there inexperienced players. It was clear to them and everyone watching,  the big stage  and bright lights were a hindrance on this evening. Mullaney and Masonious would try and put there team on there shoulders. 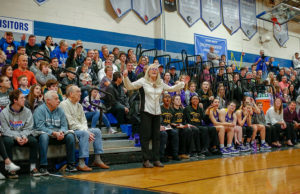 Coach Mary Beth Chambers, has a history that few know about. She has made a reputation for scouting and preparing teams on defense. When her daughter played at St. Rose she conducted film sessions. Her daughter turned the lights out on some of the GREATEST players in shore history. Last night, she knew if both Mullaney and Masonious went off, her team would be in trouble. So she packed lane with bodies. More importantly when the two stars did not have the ball,  her team knew where they were at all times. Mullaney and Masonious did not go off. Anytime the two stars but the ball on the floor, Coach Chambers ordered her troops to swam to tbe ball. She decided Mullaney and Masonious would not beat her team. Once again Coach Chambers prevented two superstars from GOING OFF. 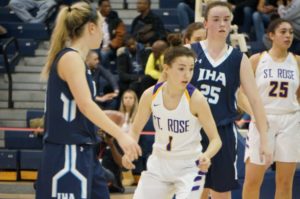 Abby Antogonli was in full control last night. Her nine points on run outs in the first 12 mins was impressive. But her total command of the pace of the game was more impressive. She knew when to turn her team loose. She knew when to slow them down. Her offensive rebounds crushed the Manasquan’s teams will. She made sure every single player on St. Rose touched the ball, shoot the ball and be involved. She led verbally, emotionally and by example. She had exactly “zero turnovers” last night. Abby Antogonli has fell in love with the big stage. Yesterday nobody WAS BIGGER. 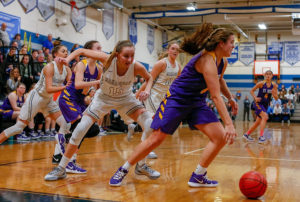 MAGGIE AND MAUREEN STAPLETON, are sisters. They do many of the same things. Yesterday those things inculded timely three point shooting. Their shooting put the Manasquan crowd to sleep  and energized teammates and friends. But it was their passing that broke Manasquan heart. They played unselfish basketball with FORCE.  Just as  important both were masterful off the ball on defense. The sisters seem to be in the way of Masonious and Mullaney all night. This sister act was a thing of beauty. 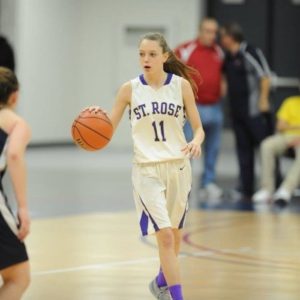 LAUREN LITHGOW is known for her shooting. She had 9 quality points last night. She had points that mattered. But her defense last night was completely what Coach Chambers was looking for. She was active on and off the ball, harassing anyone in a St. Rose uniform, mostly Lola Mullaney. SAM  MIKOS joined the defensive party as well as she prevented Masonious from going off until the game was well decided, both were hound dogs all night. 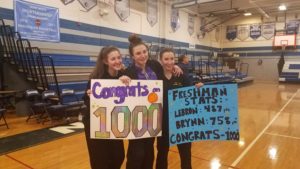 BRYNN FARRELL is a star and gets the lion share of the credit. Yesterday she had a uneventful 15 points, outside of scoring her 1000th point. She shared the moment with her new teamnates. Yesterday her teamnates picked her up. She needed to trust they could do the job. They did not let her down. Her teammates played as a team, they shared the ball and played for each other and Brynn. They wanted Brynn to know they are good without her but great with her…BRYNN KNOWS THAT NOW.

*All players are welcome to attend both sessions at one price