With the AAU season starting, I will spot- light the top teams and players in Central Jersey. Today I will spotlight maybe the best young talent not just in Central Jersey but maybe the state. The JERSEY SHORE STARZ (former the Tom River Starz) is loaded with talent in every position. They have the  2 best incoming 8th graders in the state and 3 of the top 9th graders in New Jersey. NO YOUNG TEAM THAT HAS MORE TALENT AT MULITPLE POSTISIONS. 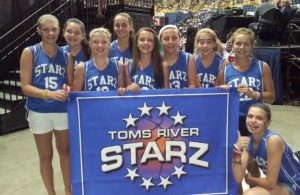 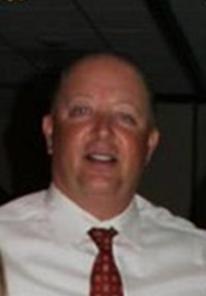 Right now he is running one of the best organizations in the state. His is the true definition of a drama free AAU PROGRAM. Why? Because he has done what few AAU programs are willing to do. Surround his program with quality kids and parents. No stealing kids from other programs or making promises he can’t keep. Joe Bisogno is sitting on what may be the most important group in Central Jersey. His team is the future of AAU basketball in Central Jersey. They will be this summers #1, 2019 team  for college coaches to watch. Joe Bisogno is doing it the old school way…great players who want to work and be part of a TRUE TEAM…The Jersey Shore Starz 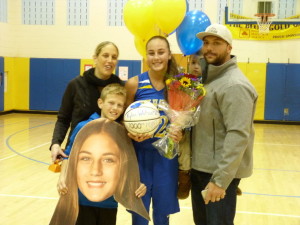 There is zero debate who will be the best incoming player in the state of New Jersey next year. She won’t be from the Shore Conference. Kylee Watson is that rare player with size, athleticism, quickness, length and speed. Now throw in the fact that she can play any position on the court RIGHT NOW. Her father is a former NFL player and the her mother is a former star at the University of Delaware. Why is this important? No drama, no kid who thinks it all revolves around her. She has two parents, that were stars in their own right and do not have to live though their kids. He talents are something that will shock everyone, right now I am not sure what her weakness are as a basketball player. But here are her strengths; team player, never moody, coachable and most importantly somebody who gets it…I believe a future Top 10 player in the country. We are talking about a future program changing player. Will become one of the best players in New Jersey the moment she steps on a high school floor. The benefit of all this will be Mainland High School where her mother is the coach…talk about luck. This is a future Mickey D’s All American… 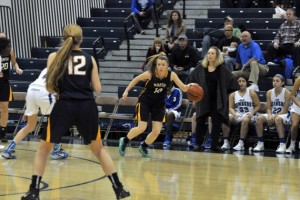 So let me start with what makes a great point guard. First they must be tough as nails and guard there position with passion. Next they must be able to handle the ball against pressure. Then they must be able to get teammates involved and find shooters. Finally all great point guards can go get you a bucket. That gets me to why we are looking at a mega talented and future D1 stud. Brielle Bisogno has a next level game right now. She is the closest thing I have seen since  former SJV great and POY Jackie Kates. Her quickness and aggressive play is something that we have not seen since Rutgers and Neptune great Sy Davis. Bisogno was on the Hoop Group All Freshman First Team. No surprise since every player who has made that team has gone on to D1 basketball. That is a given here…the real question is how high of a level will she play at. What makes her special? She has not been spoiled by attention and is a humble kid, who enjoys competition. One day she may be the standard all point gyms are measured by. 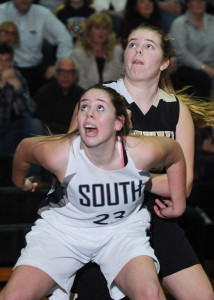 She is coming off a banner freshman season. Her team was ranked in the Top 10 all season and won a state title. She has some big moments along the way. Her ability to make 19ft jumper make her a tough match up. She proved this season that she can rebound against top competition. She is getting stronger and when that is compete she will be a force. Her passing ability is underrated as is her ability to defend top players in the shore. Here upside is scary because she is long and tall for her position. She likes to play and that is a major why she will continue to improve. Moving to the Starz will do three things for her. First she will get tons of visibility and playing time. But she also will practice against the best young post/swing player in New Jersey 3 days a week. Sam Kennan has a chance to be a very special player before the summer is over. 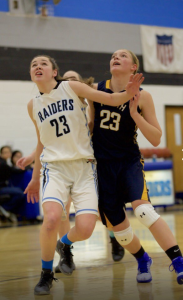 She lived up to the hype and did it while playing out of position all year. Her numbers this season were off the charts for a freshman. She was named to the HOOP GROUP ALL FRESHMAN FIRST TEAM. She has proven she is a athletic, with a sweet handle and a effective jumper up to 21 feet. The improved jump shot has made a real problem match up. But her ability to post smaller guards and get by taller players is a real match up nightmare for opponents. Jenna Paul one day will be a All Shore player before moving on to the D1 level. She is a gym rat that you can coach hard and who will give you 100% effort each night. She has played against the best competition already and has proven she will compete with whoever is put in front of her. Easily will one day be one of the leading scorers and rebounders in Tom River North history before she plays her last game. 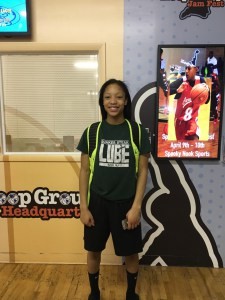 Folks what ever high school, gets this young lady is getting the best incoming guard in the shore and maybe the state. I have seen her first hand take apart some of the best talent in the 2020 class. This is the best on ball defender I have seen in years. Her strength and quickness is a rare blend of talent. She is lighting quick off the dribble and will knock down open shots. But what separates her from every guard is this…she finishes at the rim. Folks do not underestimate how important this skill set is these days.  This is a major impact player at any high school is attends. Why? because she is a next level player right now. Her court vision and sweet off court demeanor is off the charts. She will be instantly known as one of the best young players in New Jersey. Her attitude is exactly what every coach dreams of in a kid. This young lady is SPECIAL AND LEARN HER NAME NOW COACHES.

To say she blew up this year is the biggest understatement of the year. She played against the best competition in New Jersey and proved she could get it done. One D1 coache said she reminded her of Kelly Hughes of Shore All Time leading scoring fame. Before she leaves Colts Neck she will most likely break every scoring record. Her ability to score despite being double teamed and game planned for all year was exceptional. But its her ability to rebound and finish off the dribble that surprised everyone. One of the top 5 freshman in the state and folks she did it against REAL COMPETITION. She is already one of the best guards in the shore conference. The “songbird” is a lock of lock future of D1 players. Real soon everyone and their grand-mother will be begging for her services. Just a baby but made the coaches All Shore and Division team. She was on the HOOP GROUP ALL FRESHMAN FIRST TEAM. She but on a show at the WOBM this year. No player stepped it up like Lola Mullaney.  She proved she could play on big stages, score and take over games. This my friends is one special player and the scary part is she is getting better and we have not come close to seeing the finished product… 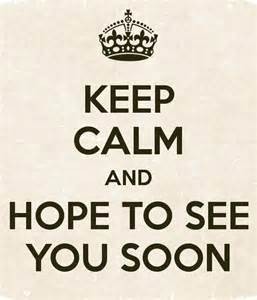 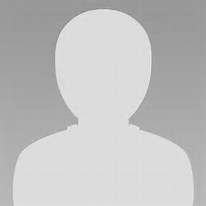 I will report back the moment I put eyes her on. But her coach cannot stop bragging about the young lady. Joe Bisogno talks of her quickness and athletic ability. No question she is somebody I am looking forward to watch play. Her older sister will play basketball at Georgian Court next season.

MY THOUGHTS ON JERSEY STARS

The bottom line is this is a college coaches dream team. The roster is stacked with elite babies. The two eight graders represent two of the top 3 incoming freshman. Kylee Watson give them a once in a lifetime talent. There have size , quickness and shooting at every position. The closet team to them was the Chambers led Clark team of 6 years ago and folks ready…this team is more talented. Coaches not following this team must be off their rocker. This is a group of well mannered parents and low key kids with a mega talent level. There represent a who’s who of young talent in New Jersey.

UP NEXT- CHAMBERS U17 JERSEY SHORE ELITE…COYLE CENTRAL JERSEY CARDINALS