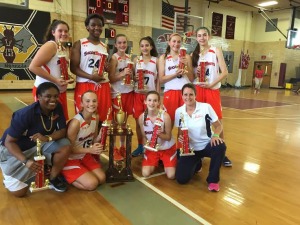 Today the Shore shots won the Maryland Invitation Tournament championship in the 7th grade division. Now this might seem like a great story if you are only talking about winning titles. The real story is about sacrifice, decision making, toughness and of course kids and parents understanding that it can be fun…. and yes you can still win the ultimate prize. 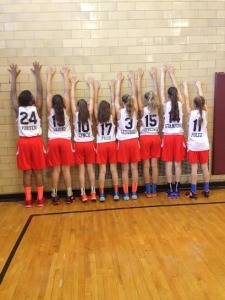 7th grade is way too young for kids to be asked to make choices, but you are never to young to make sacrifices.  7th grade is when being part of something is important. It’s an age where having fun while you are doing something athletically matters. It’s an age where approval and acceptance  from peers and adults really matters. I have seen many 7th graders who have gone on to be great basketball players… who are friendless today. There social skills were weak and nobody tried to guide to them. There accomplishments are appreciated by few outside their family. This is very sad and true. Their sport becomes bigger than forming positive relationships. I have also seen kids who have social skills that are off the charts. They get along with everyone and their hearts are made of gold. But sometimes these kids lack the desire or commitment that is needed to excel in a sport. The social aspect becomes bigger than the sport. The trick is to find that balance where the player learns to communicate, sacrifice and still find a way to smile…the 7th grade SHORESHOTS FOUND THIS RECIPE. 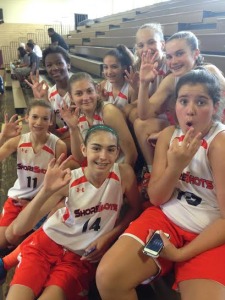 LOSING CAN MAKE YOU STRONGER!

This year the 7th grade Shore Shots lost two of the best 7th grade forwards in the state of New Jersey. These are two mega talented kids, both will be household names and among the best players in the state if all goes well. Many people believed this year the 7th grade Shore Shot team would ride off into the sunset and the good ole days were over. But what those people didn’t know was this! Kids are unpredictable and capable of surprising at any time…somehow losing such talented players made this group of Shore Shots closer and stronger, it gave them a sense of urgency. 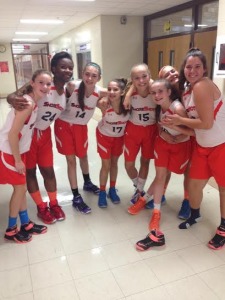 NO EXCUSES AND SACRIFICES

I like to call the 7th grade Shore Shots the gang without  excuses, because excuses are easy …sacrifices are not.  Molly Lynch plays for a national soccer program, she has a built in excuse not to get in the gym everyday of “I’m tired”….if she chose to use it!  But Molly Lynch one day will be one of the best guards in the shore and here is why. She comes to a hour plus afternoon workout or to core skills every day. She does this knowing she has her basketball practice after these workouts. Molly Lynch always shows up and doesn’t have excuses and I can tell you the hardest thing for kids to do…is to show up and not make excuses… when they don’t..MOLLY DOESN’T BELIEVE IN SUCH THINGS. I tell her I don’t like her, but she knows it not true… because how can you not but like someone so committed. 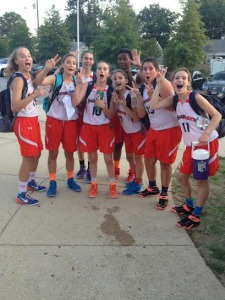 Some people say Fabienne Eggenschwiler is my favorite. Well all coaches love kids who work hard. What coach wouldn’t  love a kid who did dance for 4-5 hours some days and still showed up for their workouts. I have seen Fab as we call her barely able to move a muscle and still come to an afternoon workout then a team practice, only to end her day with a 90 core skills session. What coach wouldn’t love a kid that has done dance at the highest level and LOVED IT….only to give it up because of her passion for basketball. You may ask why? What’s there to gain? What’s to gain is that Fab has gone from a “B” team player to one of the best 7th graders in the shore. You see these are young ladies who are making sacrifices at their age which are rare….very RARE, some would call if a gift. 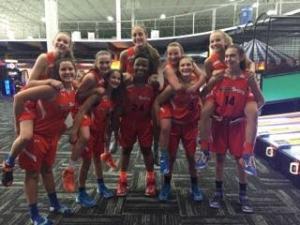 Camryn Foltz and Alexis Prus are best friends from Colts Neck. They both understand what smiling and having fun mean. There are 10’s on the likeable scale. I met them 3 years ago, when the both showed up wide eyed and fearful and not sure what to expect from a training session. I told one of my coaches after their first weekend  “get a good look at them because we won’t be seeing them around here again”  I was wrong..because the harder you coach them the more they respond. They have dreams and goals; they understand hard work is the way to reach those dreams. They are willing to train with older stronger players and not give in. They take the heat when you ride them for not being creative or too robotic. They show up after school for workouts and work, but they have been able to do all this with a smile. They take the edge off not just themselves but everyone in the gym. They have not stop working from the first day I met them. Cameron Foltz had 21 points in the semi –final and I can assure you there were smiles everywhere…because Alexis and Camryn bring that rare gift to a team…CHEMISTRY! There future’s are waiting on their greatness which is sure to come. 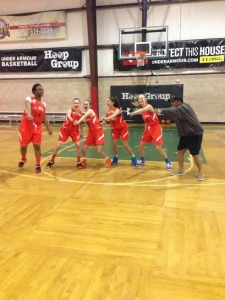 BRAVERY IS NOT EASY

It’s not easy for a young person to be brave. You see it’s hard to do things at this age when there are no  promises at the end of the rainbow. It’s harder when you are questioning if you belong or even wanted. It can be lonely and scary. But some kids can rise above their fears, like Ava Clarke and Shaelyn Sabino. Both have had to grow up faster than any kid should be asked too.

Ava Clarke tore her ACL over a year ago, and wasn’t sure if she wanted to play basketball again. She wasn’t sure if she could play again. She wasn’t sure if the team wanted her around. She didn’t know if anyone believed in her. But her Mother and Dad did and lucky for her, sometimes parents must be a rock. Sometimes they must let their kids know…I GOT YOUR BACK! Friendships also matter. In the case of Coach Tracey Sabino, she would not let Eva give up and made sure Ava knew she had a home. TRACEY SABINO HAD AVA’S BACK WHEN ALL EYES WERE WATCHING, this is what real friends do….Ava Clark is back and now she can see the future is hers again and she now knows anything is possible….BECAUSE THAT’S EXACTLY WHAT SHE JUST DID…THE IMPOSSIBLE; SHE MADE IT ALL THE WAY BACK FROM THE DARKNESS. 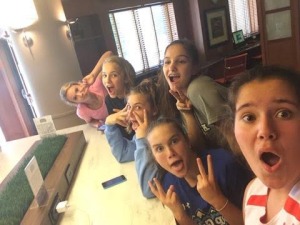 Shaelyn Sabino has needed to be brave for a different reason. She has sister going to play D1, she has another sister that will play D1 in a year and her younger sister just may be the best 6th grader in the shore. This does not leave a lot of room for shae to get  attention. She knows that she will always be compared to her sisters. Her mother is the coach of the team…I don’t have to tell you what that means… This is a tall order and a lot to deal with for someone so young and vulnerable. Shae is quite but has an electric smile that at times makes her appear as nothing bothers her. But she painfully wants approval like all kids. She has discovered that the only way to get that approval is to work and believe in herself . Shaelyn has shown bravery beyond her years… Shaelyn Sabino’s journey has just begun, but it’s off to a great start…and nobody could be more proud of her than her teammates….oh yeah ME TOO! 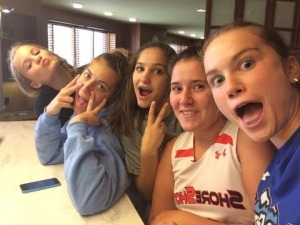 Kate Leturgez and Eric Porter are risk takers and kids who bet on themselves. Kate Leturgez showed up and tried out for one of the best 7th grade AAU teams in the state. A team loaded with stars. She was taking a chance her ego could be bruised. She was looking rejection right in the eye. This was a team that very easily could have said, Thanks but no Thanks…But Kate knew that she belonged and now she is part of something special….She was willing to take that risk many kids would not. By the way she WAS A BEAST THIS WEEKEND!

Erika Porter couldn’t make a layup 3 months ago. She didn’t understand the game of basketball. But what she was is the most athletic 7th grader, these eyes have ever seen. Her quickness and jumping ability is rare and unheard of in these parts for a girl with her size…but they would mean nothing if she didn’t take the 2 hour ride to practice and workouts 4 days a week…She will be one of the best post players in New Jersey one day…but she needed to take the risk of NOT KNOWING WHAT TO EXPECT. 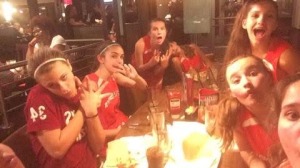 EVERY TEAM NEEDS A SURVIVOR

Nicole Stanford has been part of the Shore Shots “B” in the past. Most kids when they are on a “B” feel they are not good enough or slighted. They sometimes move on to teams where playing time is a lock or find teams that shower them with attention. Nicole did neither, she worked her way up…she did workouts and practiced anywhere and everywhere she could. She is now not just on an elite team. She is as important as anyone and now becoming a player everyone can clearly see has a BIG FUTURE! 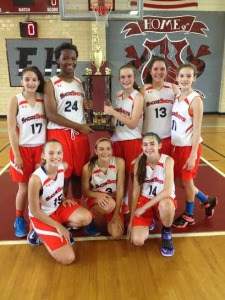 This SHORESHOTS  are a rare group of kids for such a young age. They have made some real tough decisions and sacrifices that have paid off. They will become very successful high school players and beyond that one day. It won’t be because of their talents, it will because of the make- up of the kids…these kids have real character and mental toughness…ITS RARE KID FOR SUCH YOUNG PLAYERS……BY THE WAY CONGRATS BECAUSE NOW I CAN CALL YOU CHAMPIONS

BOOT CAMP IS TOMORROW AT 1.30…IF YOU HAVE A HALF DAY OR OUT OF SCHOOL…COME JOIN US…PLEASE DON’T SIT HOME

COLLEGE WORKOUT 11.30…no high school players without a invitation.