SHAE SABINO HAS SHOOK OFF THE LABELS 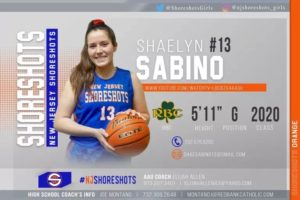 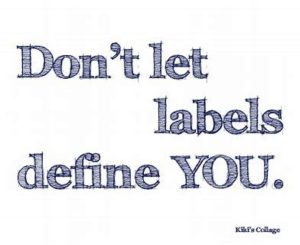 It’s easy to get labeled these days. It’s harder to shake those labels. In many cases a player is labeled along the way and that label sticks. It sticks often when the label is not true. Many times a player gets labeled and no matter how hard they work and regardless of how much they improved, the label sticks. There is no better example of this, than SHAE SABINO OF RED BANK CATHOLIC.

When I arrived at Atlantic City for the Live Recruiting Period. The 2020 Shoreshots coach Eligh Allen, walked up to me and said these words “Tiny, you better tell these coaches, SHAE is going to be a steal, they are sleeping on her” and guess what? Eligh Allen is right. Because right now SHAE Sabino just might be the most improved player in the Shore Conference. That’s not just talk, that just happens to be a fact. I like many others, had to be dragged kicking and screaming to finally acknowledge, what SHAE Sabino has done with her game. It could be because of her sisters, that many, like myself,  have over looked SHAE Sabino. Maybe we all expected her to be like her D1 sisters from day one. Sam and Syd Sabino are currently playing D1 basketball. Her younger sister Sophia Sabino is one of the most recruited players in New Jersey. She has had to live up to her sisters and has been judged by a different standard. We have never allowed her to develop like other kids. We have spent the last for years talking about what she couldn’t do. We never talked about her potential. We wanted SHAE Sabino to be here sisters right out the gate. We didn’t want to allow her to develop into the player she has become…when this all shakes out SHAE Sabino is going to join her sisters at the D1 level and everyone is going to be SHOCKED…because labels are tough to break.

So here is what SHAE Sabino has done. 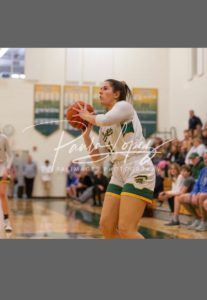 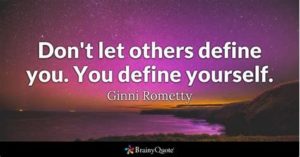 SHAE SABINO is just a tad under 6ft and has a big strong body. But she took time to learn how to use and develop her body. She heard how her foot speed was never considered good enough. She has heard she was not quick enough. So last season she started to change her body. She lost 20 pounds before the high school season. It was the start of a process that got her where she is today. She now has lost close to 50 pounds, in over a year. She had the  ability to lose the weight properly. Then she did something else, she asked her parents to hire a strength and conditioning coach. The result? If you have not  seen SHAE Sabino recently. You are in for a massive surprise, her body is one of the best basketball bodies in the Shore Conference these days. She is lean with very little body fat and now strong as a ox. How many people do you think have noticed this change? Few if any and that’s because of the labels. She was not lean and thin like her sisters. She is taller than her sisters and much stronger these days…but labels are hard to shake. Right now SHAE Sabino doesn’t care. She only cares what the people who matter most think…the COACHES. She is quicker, lighter and faster on her feet. Fast enough that now D1 schools, are paying attention and checking in. Soon more will be checking in as we get to July.

SHAE Sabino, was known for having a big body and a smile. She didn’t have a position at just under 6t. She was not considered a wing, shooter or a post player. So while everyone was talking about SHAE not having a position. Not dominating in high school, they were not paying attention. Because here is what SHAE Sabino has done. First she trained against elite competition. It forced her to tighten up her game. It’s why, right now she is one of the best passing forwards you know. It’s why she rarely turns the ball over. How many people you think notice this? Few because the labels are hard to break. She changed her shooting form, more importantly, she now has gone from a average to a excellent three point shooter. Why? Because she did two things, first she started getting to the rim with her new found ball handling skills. Next she figured out that she couldn’t simply be just a stand still shooter. She realized that posting up and getting on the offensive glass, made her more of a versatile offensive player. It also improved her shot selection, effectively improving her shooting percentage . How many people have noticed this change? Again few, labels blind people. SHAE Sabino has turned herself into a classic stretch four player. She is right now everything you look for in that stretch four. She can shoot the three, make the pass, put it on the floor, post up and guard the position because of the new found quickness…see labels die hard. Yet SHAE Sabino is overcoming it all.

Shae Sabino in white shirt, with Lauren Lithgow (West point) and the heavily recruited Camryn FOLTZ …getting that extra work in at camp during lunch break https://t.co/xtj4arsnrO

Right now, SHAE Sabino’s focus is laser like. Right now SHAE Sabino has found that confidence and  swag that kids need to be special. Now SHAE is living in the gym. She lifts with her strength coach. Then she shoots and trains everyday. She right now is trying to out work the bogus labels. Right now she is focused on her game. She is not trying to live up to others expectations. I asked her recently is D1 her goal now! She told me her goal was to attend the best school academically. She said she really believes she can play D1 but not if it means going to a school that doesn’t measure up to her academic standards. I believe SHAE Sabino has had a tough road getting to this point. I think we never allowed her to be herself. We wanted so much more from her, so much earlier. But sometimes the best things are worth waiting for….SHAE SABINO has been worth the wait….COLLEGE COACHES you better know this,…she is the most improved kid in the Shore for one reason…MENTAL TOUGHNESS. Somehow though all these years and disappoints. Shae Sabino has not let others define who or what she would become.  Though  real long term development, SHAE SABINO has beat all the labels into the ground…