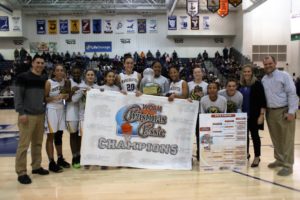 Toms River North ran all over #13 Ewing Friday night. They gave the state’s #13 a taste of Shore basketball. But they caught a very bad break later in the evening after there win. MANCHESTER played Middletown South and there star freshman Destiny Adams struggled  all evening. It was the first time she looked like a freshman. But Manchester found something out about themselves in her stuggles . They rose to the occasion without Adams. In fact going on 9-o run with her on the bench. After the game Destiny Adams was disappointed in her preformance. When she awoke Saturday morning, she was laser focused and TOM RIVER NORTH found out, there is nothing like a scorned  Baller. 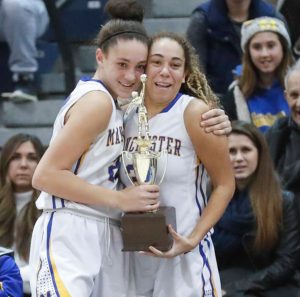 Great players have been known to turn the home crowd. They make such entertaining  plays, that soon the  home crowd forgets who they should be rooting for. They turn your crowd into fans of the game and not any  particular team. Yesterday Destiny Adams turned the crowd in a big way earlier and often. She did it by rebounding and pushing the ball at 6’3″. It was  a sight to behold. She did it by spinning and twisting in the lane for circus types finishes. She did by knocking out long jumpers for three’s. She did it with electrifying one hand full court passes. She put on a show of shows. It was not the 28 points and 13 rebounds that excited people. It was how she did it, with such flare and a smile. She did it without dominating the ball and shooting every time she touched it. She did it within the teams philosophy and system. But above all she did with a sense of innocent. She looked like a young flawn at times. She at times looked off balance and appeared ready to fall, only to strudy her long legs.  She looks  genuinely concerned for her teammates and opponents when they hit the ground. This is why when she was announced as the MVP…She got a thunderous applause from the crowd. Tom River North got a bad break but Ocean County got a superstar of the likes we have never seen before in any County. As a MAAC CONFERENCE head Coach said “she has reservations at a rare table only a few sit at”….I couldn’t agree more.

Last night was so much more than Destiny Adams. There was so much talent in the gym, it made you realize how far Ocean County has come. You had Monmouth County stars in the gym watching a Ocean game. It’s been the other way around for years. Ocean kids driving to Monmouth  County to watch RBC vs RFH or Manasquan vs St. Rose. But there was the best player in New Jersey Tori Hyduke in the stands, watching and appreciating the action.. There were kids from Middlesex County  made the drive to in the action. There little girls with eyes wide open. There were TV and Radio interviews. Ocean County was the big show last night. But it’s  what was on the floor that made it all worth the while. 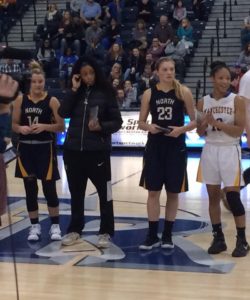 Every great show must have a great producer and conductor. Yesterday Karmeri Reynolds produced a  Emmy award winning performance. She had the perfect sound track as well. It was she a night earlier that saved Manchester with her masterful preformance. Yesterday she got her teammates involded. She knew when to turn Sernity Anderson a future D1 player loose. She found Tweety Jones for back braking three’s whenever Toms River saw a little light. Tweety played like a angry bird. She made sure Asia Harper ate last night to keep her motivated to be relentless on the offensive boards. She was brutal all night. She made sure Dakota Adams received some love with flat out beautiful  passes to her in the lane. Dakota made it one and done for TRN all night. She cleared space for rebounds for herself or her teammates, D1 schools better start paying attention. Karmeri Reynolds like all great conductors knew the mood of the  audience. She understood when to speed up the show and when to slow down and give the audience a breather. Also like all great producers she knew when to impose her will and TAKE OVER. It was she, that when things got out of control before the final whistle, who took the ball, made the foul shots and slammed the door on TRN. It was Miss Reynolds who was the most unselfish player in the gym. It was she who said damm the stats or awards…I WANT THE CHIP. It was exactly what she got and Ocean saw a great conductor go to work  in there County. 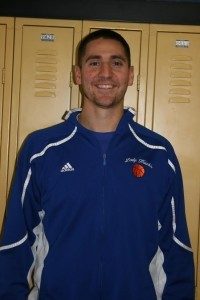 Coach Dave Beauchemin may not want to admit it. But this is all new to him as well. The big crowds, the media and the special talent he has been blessed with. But with this comes great  responsibility. A entire community is watching. His successes and failures now will be under the bright lights and out of the darkness. He is trying to build the Roman Empire again..you see he had been close before, when injuries derailed his team that looked so special. It was heart breaking, but somehow he has built a bigger and better empire. Yesterday when his young role players got out of control with excitement late. He called a time-out and railed them in. What he didn’t know was that  he was also railing in all the young mega talent from Manchester watching from the stands. 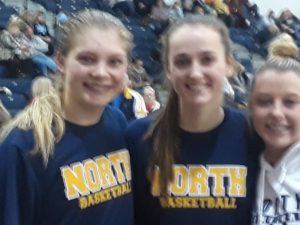 These three know there are more opportunities ahead

TOMS RIVER NORTH knew what was at stake yesterday. They knew the win over Ewing the day before would be  exaggerated. They knew #13 Ewing was overrrated much like they were last year. They beat Ewing last year, so they knew the real deal. But they also knew  this year, they were the REAL DEAL.There two superstars Jenna Paul and Brielle Bisogno knew THIS WAS THE REAL BIG GAME  and on the big stage. They also  knew at evenings end an opportunity was lost. Jenna Paul told me after, I won’t forget,  you can bet on that. Dakota Adams said we wanted to beat them on their home court. These girls are all friends and train together. Ocean County even sounds like Monmouth County now and that’s fine by me and fans everywhere. The  losses  sting more and mean more. TRN  3rd star Amanda Johnson was ready, but she had a bad ankle, she sprained the night before. She didn’t want to make excuses but it was clear she was not herself, AMANDA JOHNSON got the impossible task of guarding Destiny Adams, when she was not 100% percent. It had to hurt because she was part of TRN when nobody cared and yesterday was suppose to be the payday. TRN like Ocean County knows respect is hard to come by and now a TOP 20 ranking is out of their control. They know there ranked ahead of RFH in the Shore poll but don’t have the pedigree of the Bulldogs. They also know 5 Shore teams are in the Top 10. They also know Manchester will move into the Top 20 and that will make it 6 Shore teams….they will need help to make it 7… Respect sometimes comes in different ways and not always in the form of rankings because TOM RIVER NORTH AND MANCHESTER earned the respect of the entire state last night.

PARENTS HEADS UP…The winter training at Hoop Group starts this week…THE SATURDAY CORE SKILLS BEGINS THIS WEEK..I believe this program is a must for all kids with a dream or hope of getting better..The Track record speaks for itself… Hoopgroup.com and coop@hoopgroup…GOOD LUCK