There is a park I pass on my way to NBS, and recently whenever I go by this park I see a number of girls in the park playing basketball. I make a point to stop and watch for a few minutes, just to take in the action. In the past when I went by that park there was never a reason to stop, because it was always empty. I always wondered why kids didn’t use this park. Nice rims, a paved ground and lit by the sun light. My daughter and I would wake up before she went to school and shoot at this park; I believe she was the only girl I had ever seen in that park. But that has all changed and the reason why is Dayna Sclafani! 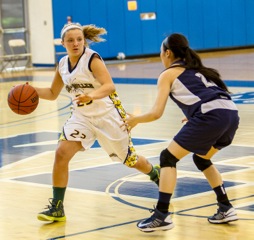 Dayna Sclafani has led East Brunswick back to greatness

Three years ago the once proud East Brunswick program had hit rock bottom. There were few girls training or even playing basketball in the town. It made for some tough times at a school that had produced state championship teams and a number of college players. So when Tom Sclafani took over the East Brunswick program he knew he had to make some changes. He needed to get kids in town playing hoops again.  Winning games was not the priory for Coach Sclafani, but building a sound foundation was, and that’s exactly what he did. So he turned East Brunswick into a basketball family. They went to camps together; he had workouts and took an interest in all the young players in town.  But it was not until his daughter Dayna arrived that things turned around. 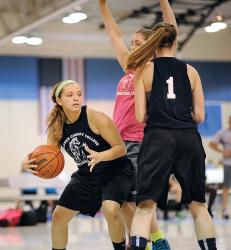 Dayna Sclafani helped her dad turn around a dead program

When Dayna Sclafani was a freshman, I went to watch her play but wasn’t prepared for what I saw. While most freshmen make their mark by scoring points, Dayna Sclafani did it by doing dirty work. She took charges; she played 3 positions and was fearless. She spent most of the game on the floor diving for loose balls. It was as impressive showing of impacting a game without the ball, but even more impressive was the connection she had with her teammates. She had clearly won them over with two things, her work ethic and leadership. I knew right there SHE WAS SPECIAL! 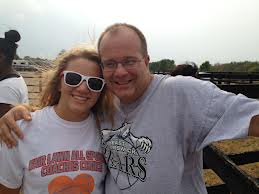 Dayna and Tom Sclafani had to hang on to each other

During Dayna sophomore year her mother was diagnosis with cancer. This is a scary word folks and Dayna Sclafani must have been under tremendous stress and her dad no question was in a tough spot. That year, I went to watch East Brunswick play Colts Neck in a war. Dayna Sclafani and Seton Hall bound Katie Healy were both brilliant, and both displayed IQ’s that I’m not sure are matched by many guards …PERIOD. Dayna scored, passed, rebounded and of course took charges. I was shocked at how far the East Brunswick program had come in such short period of time. Colts Neck won the game, but it was clear East Brunswick was building something special. I spoke to Dayna and her dad after the game. Neither said a word about the uphill battle they were facing at home. I would not find out until Tom Sclafani resigned later that year, that his wife and mother of his children had cancer. What made all this even tougher, was Tom had just lost his dad months earlier…he and his daughter never let anyone know any of this! Now you know why anyone that see’s Dayna play calls her a WARRIOR!

Last year with a new coach, the good news that her mother was cancer free and two years of building under her belt, the East Brunswick team and their Captain Dayna Sclafani did the impossible;  the #1 seed in the Middlesex County Tournament was East Brunswick.  Dayna was named ALL COUNTY for helping lead a program back to the top of the mountain. All that was left was her upcoming senior year and waiting for a college to come along. That didn’t take long because Chestnut Hill offered her in May of her junior year. 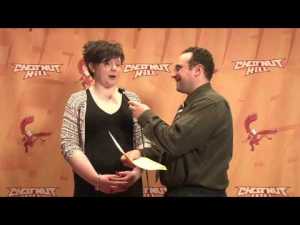 Coach Pruitt is getting a Coach on the floor

Dayna Sclafani, is the type of kid that if you’re not paying attention to…you will miss her. I have seen her against some of the best players in the shore perform lights out. She’s not flashy and doesn’t overwhelm you with athletic plays. What she does do is out play the player in her position every night and she does it with brains and skill. Everything with Dayna is simple and right to the point. No wasted energy, no show boating, no faces, just good old fashion winning basketball.  Dayna Sclafani makes any team she is part of better, for one reason. She wants to know what she can do to make her teammates better! Let me repeat that, she wants to make her teammates better. Folks I can count on my hand how many kids have that approach towards basketball. Maybe this why Chestnut Hill College decided they needed Dayna Sclafani in there program.  “Tiny we are not just getting a great player, but a great family as well” Laura Pruitt, Head Coach, Chestnut Hill College,tweeted to me….SHE’S RIGHT! 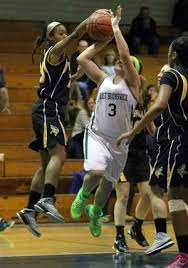 Chestnut Hill reminds of East Brunswick, when Dayna Sclafani arrived there. They have a coach who is trying to bring a program back to life. It’s a program that plays in a tough D2 conference and getting a scholarship to college is nice but winning makes it better. Dayna Sclafani is a leader and a coach on th floor and that helps when trying to turn a program around. But more than this, Dayna Sclafani is a winner and a program kid and this is just what the doctor ordered for Chestnut Hill. She understand tough times and what it takes to be part of something built from the ground. She had full scholarships offers from other colleges as well, but Coach Pruitt understood Dayna is so much more than a basketball player. She is a leader and low maintenance kid. She doesn’t need bells and whistles to be happy. She doesn’t need the spotlight in her face and most importantly, she doesn’t need to be told how to be a good teammate. She has that part already down. Sclafani picked a school that needed her and wanted her and that’s why Chestnut Hill is getting a winner and leader! 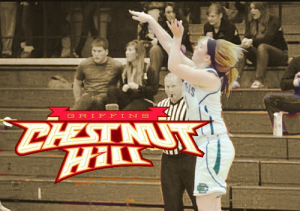 Chestnut will be shooting for the Stars

That gets me back to my story about the park, so who are those girls in that park playing? Those are the East Brunswick, girls’ basketball team. Dayna Sclafani, is there running up and down with her teammates supporting and encouraging them. You see girls are once again playing in the town of East Brunswick and Dayna Sclafani is a big reason way. East Brunswick has maybe the best incoming freshman class in the state. It was her father who started inviting those star freshmen when they were 6th graders, to come workout in the gym. It was Dayna Sclafani who made them feel like them like they all belonged and encouraged them stay and play for their home town team. The East Brunswick Fab Four, already know, respect and love Dayna Sclafani, she is their Captain and they wouldn’t want it any other way!

Dayna Sclafani is what is good about sports; she shows that character and commitment can overcome so much.  Chestnut Hill hit a home run, because their best recruiter and hardest worker will be Dayna Sclafani….oh yeah about that park, a month ago I drove by that park. I saw a lonely figure in the  park shooting by herself , but this time not only did I stop, but I yelled out “way to go Dayna” because I wanted her to know she will never be alone because too many people love her…CONGRATS TO DAYNA SCLAFANI ON HER VERBAL TO CHESTNUT HILL…..Good kids do win!

College coaches will have Video in there mail box TODAY!