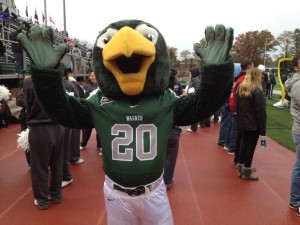 There always comes a time when kids are asked to step up. Sometimes kids start doubting themselves and when this happens, you find out so much about a kid. ADDIE MASONIUS was in this exact spot in September. But Addie is a fighter and fighters always find a way. It’s the reason why ADDIE and Wagner college created a little bit a magic on Monday night… THE ARTIST A.K.A. ADDIE MASONIUS GAVE WAGNER COLLEGE A VERBAL COMMITMENT. 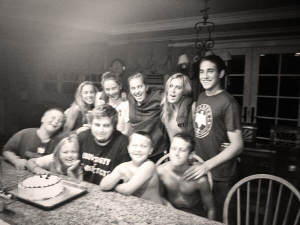 On Monday night ADDIE Masonius became the first player in the class of 2017 to give a Division 1 school a verbal commitment. It was a very strange place for Addie BEING THE FIRST . So often she goes unappreciated and being first is something that  rarely  happens in her case. She is usually the last player to be appreciated by fans and those who follow the shore conference. Addie is the player who does the little things that only teammates and coaches can appreciate. She is that player that plays with HEART, which is way bigger than her size and she gives 100 percent always. Addie Masonius is the ultimate teammate, because she always thinks about her teammates first and gives the most to them, trying to make them shine not herself, while  asking for the least; Addie Masonius is a giver not a taker. She is never the one that is first when it comes to getting credit or attention but on Tuesday, all the changed because Addie is the first in the class of 2017 to just say yes…. THERE IS MAGIC IN THE AIR BECAUSE WAGNER HAS THE ARTIST ALL WRAPED UP. 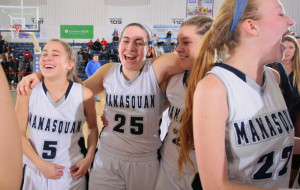 WHENEVER I see Addie Masonius she has a smile on my face and it is infectious to those around her. Addie is one of the most positive kids I have ever met and  negativity is just not part of who she is. Addie has a way of turning any negative into a positive. She is that player that is constantly  pumping up teammates with that  positive energy which oozes out of her pores. She is the classic energy giver not taker to a team or training session. But sometimes even the best kids need a pat on the back and somebody to tell them, they too are special. Sometimes that kid who works so hard and gives so much of themselves to others needs to be told “we appreciate you”. This is exactly what ADDIE needed one day at a NBS….  FOR THE FIRST TIME, SINCE KNOWING ADDIE MASONIOUS… I SAW TEARS AND SADNESS IN HER FACE. 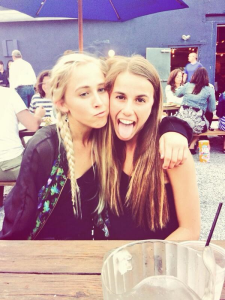 I walked up to Addie during  a break at NBS and I was hoping to tell her one of my silly little jokes and make her laugh. But when I walked up to Addie I saw a sadness come across her face, that I have never seen… it shook me up. Addie is always the one that brings fun to anything that she is a part of,  she is the one that lifts everyone spirits. I asked her what was wrong and then tears swelled up in her eyes and she looked at me and said “I can’t  guard her”. Addie had been coming off shin splints and had not been able to play for weeks. She was also matched up with the fastest girl I have ever seen, a player who had been dominating NBS for weeks. I smiled and I said Addie she is from Pennsylvania and nobody guard her. But Addie would not except this, she said I can do better….ADDIE is a the ultimate competitor.. That day after NBS I was upset, because I had never seen ADDIE DOWN… But what makes Addie special is that she’s a fighter, Addie Masonius went on the mission of missions…when  most people were not paying attention.. 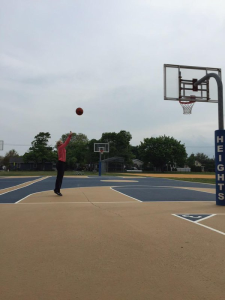 If you have seen Manasquan play this year you have noticed a few things different about their team. You will have noticed Addie Masonius  is burying open shots like McDonald’s makes hamburgers. It was this newfound jumper that broke RUMSON heart in a battle of top five teams this season. This is something she would not able to do last year. Last year Addie came off the bench and  this year she is starting. It means more minutes and more time on the floor,  it also means Addie needed to be in better shape. Well this  season ADDIE Masonius looks like a one woman tornado the moment she hits the floor …it appears she has an unlimited level of energy. It was the reason she made one of the biggest plays of the year against St. Rose, when she out hustled everyone for a loose ball with 14 seconds left to help slam the door on ST. ROSE…. IT TOOK REAL WORK FOR ADDIE TO MAKE THESE PLAYS IN MANASQUAN’S two biggest wins of the year. But working has never been a issue for the Artist! 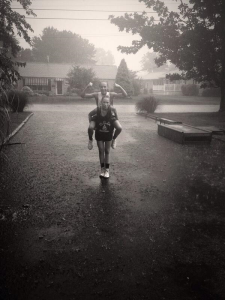 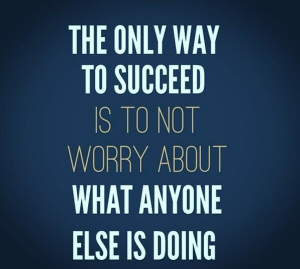 How did Addie get in such such great shape?  How did  ADDIE develop a sweet shooting touch this year? Why is Addie one of the most improved players in New Jersey? Because Addie put a full-court press on everything basketball related. Most people don’t know Bob Green, but he’s a taskmaster and is known for pushing kids to be their best mentally and physically. There was no question Bob Green was just the added touch Addie needed this fall, in order to put everything together and lead to what has been nothing short of a sensational season. 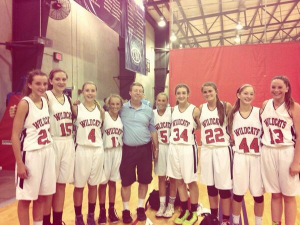 BOB GREEN IS A MASTER TEACHER…

Bob Green’s  passion and love for Addie can only be understood when you watch the two in the gym. Bob Green understood Addie’s talents don’t always get appreciated, but he made sure that ADDIE KNEW HER TEAMMATES AND REAL BASKETBALL PEOPLE KNEW HER VALUE. It was people like Mike Rice who supported Addie and reminded her that if she worked hard and continued to develop all would be good. Lisa Kukoda is the role model all kids need. She is that nurturing coach that young ladies need, when they are not sure about the future or in this case if they are appreciated. Lisa Kukoda, Mike Rice and Bob Green are the backbones of  the Village the created Addie Masonius….today they can take a bow! 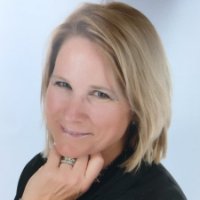 Ellen MASONIUS is not just a mother and coach to ADDIE. She is the person that believes in ADDIE most. She is the one that sees Addie do so much and get so little credit. She knows Addie has a cousin in Stella  Clark who gathers as much attention from fans in media as any player. She knows she has another daughter in Faith who just may be the best player in New Jersey. She has a son who will play in the NHL in Joe.  She knows it’s very easy for Addie to be dis- missed, forgotten and overlooked. But it was she who constantly reminded Addie that she’s as good as anybody  and playing the game hard, the right way and being a good teammate has real value….just ask WAGNER COLLEGE if she knew what she was talking about! 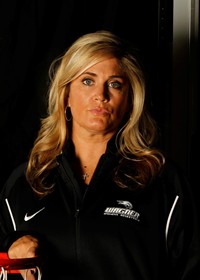 When Lisa Cermignano  called me one  night a few months ago  and said  “Tiny I’m going to offer ADDIE MASONIOUS”. She talked about Addie being another piece to the puzzle, she talked how she needed kids like Addie who play winning basketball. She also said things like Addie has played against the best competition and has been in wars, things you can’t teach but must experience. But she also said something that stuck with me that night. She said “tiny you cannot teach passion” Addie has more passion than any kid I know when it comes to basketball and life…folks it’s her real gift and it shows in her art. Wagner  lost four starters this year. It been a nightmare for a team many said would turn the corner and contend for the NEC. WAGNER had most of it babies back and they were seasoned babies. Now WAGNER Has signed 3 shore players and once the NCAA sorts out the eligibility time of the injuries players…WAGNER COULD BE SITTING ON A GOLD MINE! 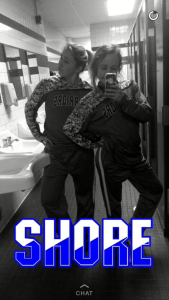 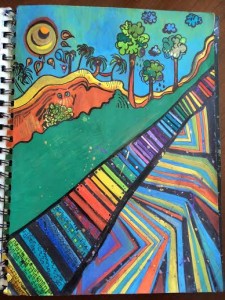 Addie “the artist” Masonius  created her masterpiece on Tuesday.  She  proved to create magic, you must have a vision, a purpose and an understanding of what needs to be done. Addie had this and that’s why Tuesday, a magical partnership was born. Addie wrestled with the decision to commit to Wagner College or should wait and continue to listen to other schools. But her mother told her, if you like everything, then commit… if not wait, she put it in Addie’s hands. On Tuesday night, ADDIE picked up the phone called WAGNER COLLEGE. She then went quietly to sleep and when she woke up the next day…SHE TOLD HER FAMILY.  Like everything else with Addie, there  was no bells and whistles, that went off. 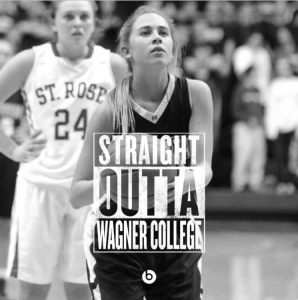 One thing everyone will always remember is this… finally ADDIE is first…. THE FIRST TO COMMIT IN THE CLASS OF 2017…finally ADDIE is the first thought… CONGRATS TO WAGNER AND ADDIE…just call it MAGIC!