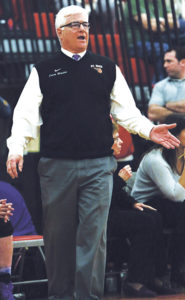 Yesterday it was announced that Joe Whalen resigned as the head basketball coach at St. Rose. It marks the end of a remarkable run. In his final year at St. Rose, Whalen teams won a SCT title this season and was ranked both nationally and in the state. His career record at St. Rose was 128-21 in 5 years.

During his time at St. Rose, fans saw Cindy Napolitano break the state three point shooting record. This record a year later, was broken by Kat Phipps who would also go on to make All State and sign at D1 St. Francis of NY.  Jess Louro  would become the Hoop Group Player of the year and sign at powerhouse Middle Tennessee. Every player in the St. Rose starting lineup, last season has received a D1 scholarship including 6th man Alex Pendergrass. Often criticized for playing a weak schedule.  Whalen teams beat some of the best teams in the state and often played nationally ranked team in other states on the road.

JOE WHALEN encouraged his team to train and play year round together, including during the AAU season. This often meant players having to leave their AAU teams.  The players in the summer were often up at 6.30 am in the morning to shoot. Whalen practices resembled what many called a college type setting. He often would spend time in the off season with NBA teams like the Spurs and Celtics. He would pick up idea’s and bring them back to his team the following season. His relationship with fellow shore coaches and parents at times, were testy at best. 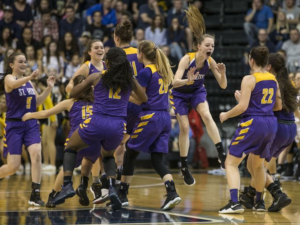 This will mark the 2nd time a coach at St. Rose will resign after winning a SCT title. The last time the program was on life support, due to graduation. The team the next  St. Rose, coach will inherit, will be one of the best teams in the state. They will have 3 division one starters returning. Plus Lauren Lithgow, who may be their most talented player, will move into the starting lineup. Lithgow is a future D1 lock and could be one of the best guards in the state, next year. She has spent the last two years, getting little time. S0 there may be a learning curve involved. Perhaps a bigger story is that one time 8th grade star, Danielle Jordan will return to the team. Jordan, has looked spectacular  in the early spring season. She could be a star in the making. The next coach also will have two of the best entering freshman in the shore. Maureen Stapleton and Abby Antognoli are mega talents. Coach Whalen, traditional did not make  a practice of not playing freshman. The next coach may decide to play both babies, if they feel they are ready.

There no question, will be a large number of people applying for the job. St. Rose will have no shortage of applications. It has a long rich history and with the all the returning players, this appears to one of the best jobs in the state.