WHAT WILL BE YOUR TEAM’S IDENTITY …IS IT ENOUGH? 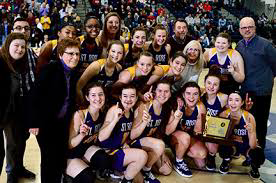 Well its here, the first official day of practice. Today everyone gets down to business. Today the player rotations start to take place and get established. Today nobody except parents and freshman are talking about fall and summer league games. Now things get real, Today feelings and egos get checked. Starting today High school basketball teams are creating there teams identity. Today each team is establishing there culture. Today dreams are getting chased.

ST. ROSE is going to rebound and defend because it’s who they are, that’s never changing as long as Mary Beth Chambers is there coach, it’s there identity. But this year she will have something her team has been missing in recent years..deep coachable talent. Giving her more flexibility than any time since becoming the head coach at St. ROSE. She also has a dynamic guard on the way. The St Rose team identity may be more than just grinding and out working opponents with coaching and toughness… There team Idenity could expand starting today.

RBC’s team identity has always been a suffocating half court defensive team, while sharing the ball on offense. The name on the gront always bigger than the name on the back. They have been the role model for team basketball. Now everyone is watching. That’s because the gold standard of girls basketball programs has speed and more speed, shooters and more shooters. Talent and more talent. All eyes are on RBC, are they going to play faster, shoot quicker and play with an identity that nobody could ever imagine? RBC may be going though an identity change starting today.

HOLMDEL today has the identity that doesn’t invoke fear. There have talent but what is that talent going to look like with a new coach. Will they find a team competive nature? They and their new coach are about to find out more today

OCEAN TWP identity is dangerous. The FOUR HORSEWOMAN can play with anyone. The problem is what to do when the 4 HORSEMAN are down to two( injuries)..do you change the identity tonot so dangerous?

RFH is going to play wild and carefree. They have been gunslingers in recent years. But starting today they may have to harken back to days gone bye. They may have rely on defense more. But it’s hard to change and maybe RFH will just be them, if it an’t broke why fix it? …today they make a decision.

WALL…RBR TRN and a few others have big decisions to make. There have to decide how big they want to go…if they want to get to the next level. THERE IDENITY NEEDS a surprise. Something nobody is prepared for. Today, they will start to try to come up with something different to close the talent gap. Today there are going to decide what there really playing for..

Tessa Carman may be ready for consistency and stardom

Christina Liggio is ready to be the go to player

Cassidy KRUESI is going from role player to real player

Ashley SOFILKANICH is moving to what can be ..to what is

Eli Clark is moving from unknown to ALL SHORE

TANAIYAH Decker is hoping to move from impact player to championship player.

Aleena Dinker is ready to go from going to be good to REAL GOOD!

Janeen Ayyash is ready for everyone to stop making believe she is not one of rhe best.. she is!!

Katie Collins is ready to be the next superstar at Manasquan

Camryn Gardner is ready to show she is the total package

Julia Corsentino is ready to be called a RUMSON great.

Rylee Drahos is ready to prove she is legendary

Gabbie Ross is ready to remind you she is Oceans best

Carlie Lapinski is readycto show what a impact transfer can ready do for a team.

THERE ARE MANY IDENITY’S READY FOR A CHANGE….and where all waiting💪🤞

There is a lot going in the basketball world, these days. There are players getting ready to verbally  commit to schools. There are also kids picking up scholarship offers.

By now you know the best entering Freshman class maybe in Shore history will take place next year. It is a deep class and throw back group from years gone

In many cities and states across the country, high school basketball has been canceled. New York and Pennsylvania have no plans as of now to resume basketball anytime soon. New