Skip to content
Posted on December 20, 2017 by Tiny Green

Yesterday when RBC and Mansquan stepped on the floor ready for the tip. You could feel the energy and anticipation in the air. But by holding RBC to two points in the 2nd quarter, Manasquan sucked all the air out of the building. On the first possession of the game, off the tip, RBC threw the ball away, it set the tone for what would become a theme for most of the night. Manasquan ‘s length and activity slowed RBC’s passing to a crawl. Every pass was made with stress and  apprehension. RBC  constantly  bobbled passes that were too high or low or just plain dropped them. This led to a nightmarish evening as Manasquan defended their three point line with total Abandonment  about above all else. RBC ran into a brutal storm and got lost in the TRIANGLE OF DEATH and was never seen again in a 60-37 lost. The good news for RBC is that they won’t be lonely. Many teams will get lost  in the Triangle of death, also known as LOLA MULLANEY, DARA MABREY AND FAITH MASONIOUS this year. 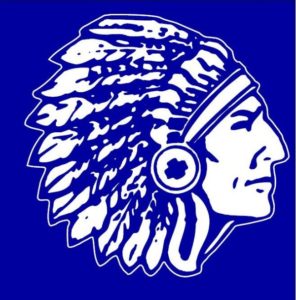 When Carly Geissler walks to the free throw line with 3 minutes left in the game. All the suspense of the evening had long been gone. The only question left was would anyone other than the “Big Three” would score for Mansquan. Geissler made both ending the last bit of suspense of the night. The Big Three were lethal last night and Faith Masonious got the party rolling early. It was Faith Masonious who was unstoppable in the first half and she sent RBC into the Abyss. She started out getting on the offense backboard, then she buried jumpers. Then she broke RBC down off the dribble and finally turned over RBC for easy breakaways buckets. Faith Masonious put in a games worth of  productivity in half. Faith Masonious showed what we have all been waiting on…that she just may be the best player in all of NEW JERSEY. She at one point was 7-7 from the field. She finished with 20 points yesterday and set the tone for the evening. She was the point of the TRIANGLE OF DEATH. 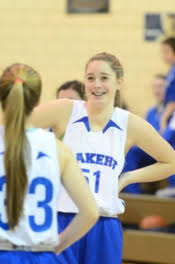 Last year Lola Mullaney played the good solider for Manasquan coming off the bench. This year, she is playing the staring role. Yesterday we got our first peek of maybe the most efficient player in the Shore. Lola Mullaney doesn’t get the most shots but makes the most of the ones she gets. Yesterday early in the game, while Masonious was taking RBC to the  woodshed. She quietly was chipping in with steals for breakaways  and a few jumpers. But in the 2nd quarter when Rose Caverly and RBC’ baby, Sophia Sabino tried to bring RBC back into striking distance, cutting a 21 point lead to 15. Lola Mullaney went  medieval on RBC , she was downright cruel as she buried jumpers and got to the rim, dashing any hopes of a RBC comeback. She craved up RBC  like a seasoned surgeon. RBC just like last year had no answers for long  slinky wing. Lola Mullaney sent a meassage last night, the Triangle of Death is not a place you want to wander into, because you will not find your way out. Lola Mullaney made sure RBC couldn’t find its way out…She had 16 points and was sensational all night. 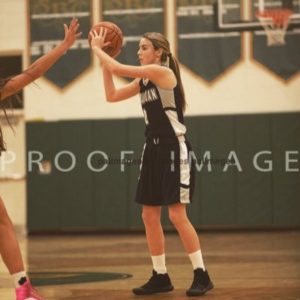 Lola Mullaney has be turned loose

Dara Mabrey is the smartest player in New Jersey. It’s why she was  assigned to start the night on deadly shooter Hayley Moore. She threw Hayley Moore into the ice box in the first half. The future Binghamton guard did not attempt a three point shot in the first half. Mabrey never left her for a second. She was brilliant on defense but she is Dara Mabrey and people only notice the box score. It’s why Lola Mullaney turned things over to the most deadly player of the Triangle of Death…Dara Mabrey. It was she that took RBC on the final deadly ride in a storm of  Complete dominance by Manasquan. Dara, got it going early in the 4th as she buried jumpers and then forced the issue at the rim and walked to the free throw and made free throw after free throw. She made it impossible for RBC to even dream of escaping the Triangle of Death.  She finished with 20 points and proved again she is the ultimate closer as she closed any escape route out for RBC. 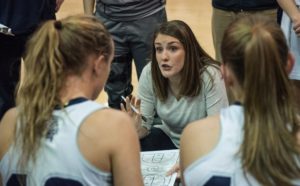 Yesterday we learned a valuable lesson. That is Mansquan has 3 powerful weapons and Lisa Kukoda is not afraid to use them. We  also learned that the  Manasquan’s role players are not afraid to check their egos at the door. Carly Geissler has done this her entire career. She had the pass of the night. Emma McMenanman was perfect in her role. She played defense and was mistake free. It was she who her got the biggest applause when she blocked a shot . Freshman Macy Black was cool as a cucumber. She showed bright lights don’t scare her. Lisa Kukoda showed she is not afraid to go to her bench, she clearly believes and trust in them. 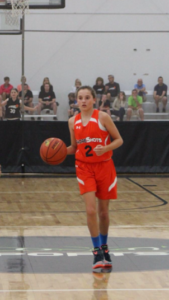 Sabino showed she is not afraid of the bright lights

Now what does all this mean? The truth be told, not a heck of a lot right now. Manasquan has held serve in a big way. You will hear all the nonsense about statement win. You will hear Manasquan is the best team on planet earth. This is called living in the moment. But Manasquan will have to play RBC again on the road. RBC lost every  individual matchup except one last night. RBC baby Sophia Sabino had 10 points to led RBC in scoring. Next time around she will be a much different player. Next time around projected starter and 5′”11  stretch forward FAB EGGENSHWILER will be back. The RBC seniors could get what is their last crack at Manasquan in there next meeting. Things could be very different. But If they hope to get a win ..I have a little bit if advice for them…but all means stay out of the TRIANGLE OF DEATH….. The Bermuda triangle is a better place to be than the TRIANGLE OF DEATH

TRAINING DATES OVER THE HOLIDAYS….see you there😁🏀